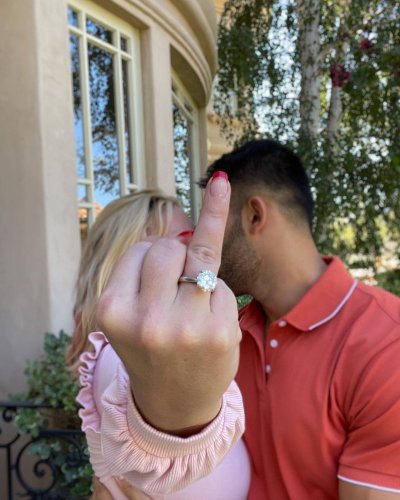 Britney Spears announced her engagement to boyfriend Sam Asghari! The couple has been dating each other for four years. A day ago, Sam posted random pictures of an engagement ring on his Instagram story. Fans suspected that there was something cooking but Sam discarded the engagement news saying his account was hacked. He added another Instagram story writing,

“Account got hacked and was photoshopped — calm down everyone!”

But a day later Britney herself confirmed the engagement news posting a video of herself showing off the new engagement ing. Her manager Brandon Cohen released a statement,

“The couple made their long-standing relationship official today and are deeply touched by the support, dedication and love expressed to them.”

The engagement ring was designed by jeweler Roman Malayev and is a 4-carat diamond ring by Forever Diamonds NY. Sam revealed,

“Every designer I spoke with about the ring was amazing with great ideas, but I just clicked with Roman – we really connected on the design and he was as excited as I was to make it special – that’s why I chose him,”

Roman revealed that he felt honored to create the ring for the couple. He disclosed that the ring was one of a kind.

What do fans have to say about the engagement?

In the Fox News article, fans have shared their mixed reaction to the engagement. One of the readers wrote,

“Just a coincidence that the ring only came, once it was clear that Britney would be gaining control of her own money.”

Likewise, the third one wrote,

“How generous of him, buying a rock with her money.”

Also, another pointed out,

“Nice. I predict a divorce in about 2 years after he “K-Feds” her, and then she’ll be back to bashing in cars with an umbrella after shaving her head again.”

“Do you honestly believe that the size of a diamond is going to hold a marriage together?”

Britney Spears is a famous American singer and dancer. In addition to singing, she is an occasional actress. She is best-known for her first and second studio albums, ...Baby One More Time (1999) and Oops!… I Did It Again (2000).

According to Forbes, she was the highest-paid female musician of 2012. Read more bio…