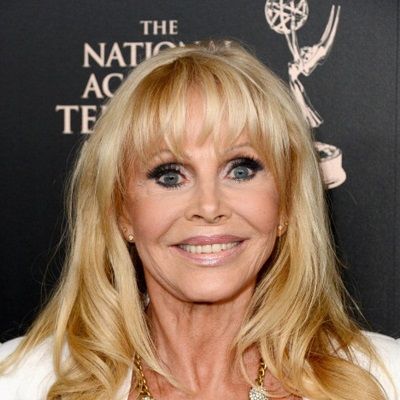 The ideal man doesn't exist. A husband is easier to find

I spend hours mowing the lawn in absolutely straight lines on my tractor. If it's not right, I do it again

As for the stage fright, it never goes away. When I'm waiting in the wings to go on, it's agony every single time but I stay focused and I know that once I'm on stage it'll be fine

I'll be in my happy little bubble

I used to smoke cigarettes, ten a day, but gave up when I was 28. Now my vice is several cups of coffee a day, which isn't great if you're prone to weak bones as I am, as caffeine can leach calcium

Britt Ekland became famous overnight because of her 1964 whirlwind romance and marriage to English actor and comedian, Peter Sellers, who proposed after seeing her photograph in the paper and then meeting in London.

Ekland stood by him after he suffered a series of heart attacks shortly after their marriage. Ekland was stepmother to Sellers’ children Sarah and Michael. They had a daughter, Victoria. The couple made three films together in January 1965.

Lord Justice Orr granted Ekland a decree nisi for divorce in the High Court on the grounds of cruelty by Peter Sellers, who did not contest the proceedings on 17 December 1968. She had a son, Nic Adler, with record producer Lou Adler in June 1973.

She also had a romance with a rock star Rod Stewart they got introduced in 1975 by Joan Collins and lived together for over two years, with Ekland giving up her career to focus on the relationship.

Also, she dated and became engaged to Girl frontman and future L.A. Guns singer Phil Lewis from 1979 to 1981,

Who is Britt Ekland?

Britt Ekland is a Swedish actress and singer. She appeared in many films in her heyday throughout the 1960s and 1970s, including critically acclaimed roles in William Friedkin’s The Night They Raided Minsky’s (1968), and the British film Get Carter (1971).

Britt Ekland was born on 6 October 1942 in Stockholm, Sweden. Her current age is 77. Her birth name is Britt-Marie Eklund. Her mother Maj Britt was a secretary.

And, her father Seven Axel Eklund ran an upscale clothing store in Stockholm and was captain of the Swedish national curling team.

However, her mother died because of  Alzheimer’s disease in the 1980s, which had a deep effect on her. She grew up with three younger sibling brothers and has said that she was overweight for much of her childhood. She holds Swedish nationality.

Ekland attended a drama school and then joined a traveling theater group.

Britt Ekland started her career with bit parts and uncredited walk-on roles, including her first on-screen role in G.I. Blues (1960). Which got followed by a small supporting part in The Happy Thieves (1960).

Similarly, she appeared in the Christmas television film A Carol for Another Christmas with her then-husband, Peter Sellers in 1964. Ekland followed this with After the Fox (1966). Also, she starred at Sellers; she made one more film with Sellers, The Bobo (1967).

Famous as a sex symbol

In the 1970s, she was known as a sex symbol and was one of the most famous celebrities. Britt Ekland appeared in some first-rate productions over the years, though, two of them being Get Carter (1971) and the cult classic The Wicker Man (1973).

The peak point in her career would be her role as Bond girl Mary Goodnight in The Man with the Golden Gun (1974). After her breakup with rocker Rod Stewart in 1977, she continued to make movies both features and made-for-TV films, and tried the stage.

Also, she got reduced to appearing in things like Fraternity Vacation (1985) and Beverly Hills Vamp (1989). She was was one housewife of Svenska Hollywoodfruar on TV3 during the 2013 season.

Lately, Ekland took part in the reality TV show I’m a Celebrity…Get Me Out of Here! Where she was fourth to be voted off in 2010. During the program, she developed a close relationship with Stacey Solomon and Nigel Havers while making an enemy of Gillian McKeith.

In 2018, in the film, My Dinner with Hervé, Britt Ekland was played by Helena Mattsson.

She was nominated for the Golden Laurel Awards in 1967.

Britt has an estimated net worth of $22 million. In 1967 she earned a salary of $20k while working at the double man. Similarly, her source of income is from debuting in different movies and shows.

There were the most notorious nude scenes in screen history. some of it is an alluring expression of pagan sexuality, to others a laughably strange moment of body-doubling.

Britt said she had only agreed to appear topless as barmaid Willow. Also, she said that she did not rate her posterior highly, claiming it resembles a ski slope.

She did lip plastic surgery, and she explained how it affected her appearance. Bond Girl and Swedish sex kitten as just another aging beauty with a sizzling past an actress of a certain age.

She did candy floss hair, pink nails, and a pet chihuahua tucked under her arm. Well, she is all that, but she is so much more, too.

Britt Ekland has an average height of 5 feet 5 inches and weighs about 58kg. Similarly, she has blonde hair color with green eyes. Also, she has a body measurement of 33-24-33 and wears a shoe size of 8US.