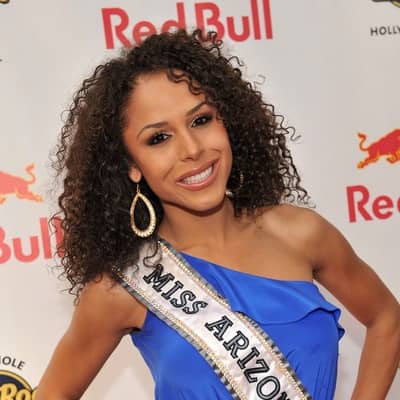 What is the relationship of Brittany Bell?

Brittany Bell is currently in a relationship. She is dating Nick Cannon. Her boyfriend Nick is an actor. She is pregnant with Nick’s 10th child announced in August 2022.

Their affair is on and off terms. They first started to date in late 2014 but they separated in Feb 2015.

Finally, Nick and Bell are together since June 2020. They together have a son named Golden who was born in 2017.

Then in Dec 2020, they again blessed with another child. Bell gave birth to their daughter and named her Powerful Queen Cannon.

Who is Brittany Bell?

Brittany Bell is an American model and beauty queen. She participated in Miss Guam 2014 and won the title.

Moreover, she was also Miss Arizona USA in the year 2010.

She was born Brittany Mesa Bell on 09 Nov 1987 in Arizona, the United States. The identity of her father is unknown whereas her mother’s name is Tina Lang.

But her dad is of All-American descent and her mom is a Chamorro. Brittany belongs to Chamorro and All-American ethnic background.

Regarding academics, she attended Arizona State University and earned a degree in Broadcast Journalism. Her high schooling was at Dobson High School.

Brittany Bell has appeared in several pageant competitions. She was Miss Arizona USA and Miss Congeniality in 2009. Then she participated in the Miss USA 2010.

Then she was seen participating in Miss Guam in 2014. There she won the competition and became the Miss Guam Universe. Then she went to compete in Miss Universe 2014.

Brittany is also associated with an NBA team Phoenix Suns as a dancer.

What is Brittany Bell’s net worth?

She holds an estimated net worth of $1 million as of the year 2021. Her salary from her career is not disclosed.

Moreover, her partner Nick owns a net worth of around $50 million.

This star is at present keeping herself away from rumors or any desperate scandals.

What are the body stats of Brittany Bell?

Regarding Brittany Bell’s body features, she loves to keep her body physically and mentally healthy. Further, she is a Yoga Instructor.

Her height is 5 ft 9 inches and her body weight is 58 kg. Moreover, the color of her eyes is brown and her curly hair is dark brown.

Into the New Photos of Nick Cannon and Brittany Bell’s son Rise Messiah!