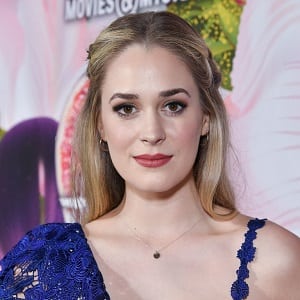 Brittany Bristow is dating a guy named Dustin Keating. Her boyfriend Dustin is not from the entertainment industry. Looking at his insta handle, he loves outdoors, traveling.

There is no info about their relationship timeline but looks like they are together for quite some time. The couple posts their pictures on their IG handle.

Who is Brittany Bristow?

Brittany Bristow is a Canadian actress and producer. People mostly know her for her roles in movies including ‘Royal Matchmaker’, ‘Love on Safari’, and ‘Wildlife Quest’ among others.

Bristow was born in Toronto, Canada on February 8, 1990. Bristow became interested in the world of acting since her childhood years.

She is of Canadian nationality and mixed(Icelandic, Irish, and English) ethnic background.

Furthermore, talking about her parents, her father’s name is Leif Bristow whilst her mother’s name is Agnes Bristow. Seems like she is a single child and does not have any brothers and sisters.

Brittany Bristow initially appeared in ‘Perfect Pie’ as Patsy in 2002. In addition, she played the role of Margaret as Teen in the TV movie ‘Profoundly Normal.’ Bristow also appeared as Erin Scott-Pierce in the movie ‘Blizzard.’ Since then, she has appeared in numerous other movies and television series. All in all, she has over 25 credits as an actress.

Some other movies and television series that Bristow has appeared in are ‘No Sleep ‘Til Christmas’, ‘Christmas at the Palace’, ‘Killer High’, ‘Love on Safari’, ‘Royal Matchmaker’, ‘Christmas Next Door’, ‘Rising Suns’, ‘Rising Suns Webisodes’, ‘Good Witch’, ‘Love Blossoms’, ‘Kiss and Cry’, ‘Coming In’, ‘Preshift’, ‘The Apostle Peter: Redemption’, ‘A Dangerous Arrangement’, ‘Murdoch Mysteries’, and ‘Sophie & Sheba’ among others.

Bristow has not revealed her current salary. However, she has an estimated net worth of around $ 1.4 million at present.

Bristow has not been part of any notable controversies in her career. Furthermore, at present, there are no rumors concerning her life and career.

Talking about her body measurement, Brittany Bristow has a height of 5 feet 7 inches (1.7 m). Additionally, she weighs around 55 kg. She has a body measurement of 36-22-33 inches.

Furthermore, her hair color is blonde and her eye color is dark brown.