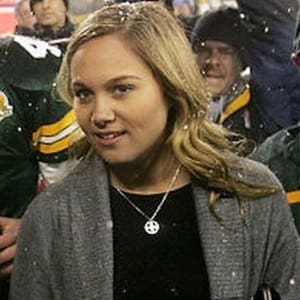 Initially, I know that I handled it worse than she did and I think partly because I've always been... every bit of adversity I've faced up until the last year and a half is adversity I brought upon myself - or the opposing teams have given me

You're never guaranteed about next year. People ask what you think of next season, you have to seize the opportunities when they're in front of you.

Brittany Favre is currently in a married relationship with Alex Mallion. The marriage date is not disclosed. This couple was blessed with a child.

Before this marriage, Brittany had exchanged vows with Patrick Valkenburg. Their marriage date is 26 Jan 2011 but the divorce date is not known. This couple also shared a child together.

Who is Brittany Favre?

Brittany Favre is an American lawyer. People mostly know her as the daughter of an American football player, Brett Favre.

Favre was born in Mississippi on February 6, 1989. She was born to parents Brett and Deanna Favre. Brett is a former NFL quarterback. Additionally, Brittany has a sister named Breleigh Favre who is a volleyball player. She is of American nationality. Furthermore, there are no details available about her ethnic background at present.

Talking about her education, Favre attended Loyola University College of Law. Furthermore, she graduated in May 2015.

Favre joined a small firm in Hattiesburg. Additionally, she specializes in sports and entertainment law. In addition, apart from her career in law, Favre has also appeared in the TV series documentary ‘A Football Life.’ Furthermore, people mostly recognize her as the daughter of Brett Favre.

Favre has not revealed her current salary. Additionally, there are no details available relating to her net worth. But her father has a net worth of $100 million.

Talking about her body measurement, there are no details available about Favre’s height and weight. Her hair color is blonde and her eye color is blue.