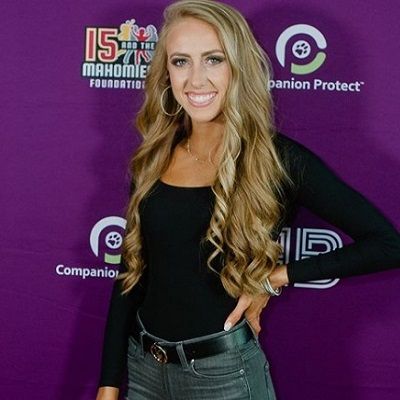 I didn’t even see myself playing college soccer when I graduated high school. However, I ended up coming to UT Tyler to play soccer because it was close to home and I knew a few girls that played here that loved it and told me I need to join the family.

Brittany Matthews is in a relationship with her high school boyfriend, Patrick Mahomes II. They are dating for seven years. Patrick is a pro football player and plays as a quarterback for the Kansas City Chiefs team.

They studied in Whitehouse High School, Texas and were together since then. At present, this couple is living in Westport, Kansas City, Missouri, with their two pet dogs.

Who is Brittany Matthews?

Brittany was born on Sep 1, 1995, in Tyler, Texas, USA. She is the daughter of Martin Scott Matthews (father) and Diana Massey (mother).

She also has a brother named Devin. They both were raised by their mother and stepdad Paul Massey. Paul passed away in the year 2018.

Brittany first joined Whitehouse High School, Texas. After this, she attended the University of Texas, Tyler. Her graduation was completed from there in the Bachelor of Science degree (Kinesiology).

Brittany Matthews has played soccer professionally in Iceland. She was engaged with this sport for several years. Then after retiring from the soccer world, she started to share workout videos and exercise techniques in social media.

Her videos are loved by the viewers and this made her a social media influencer.

Brittany Matthews’s Instagram has around 315k followers and has posted over 1.4k posts. Her Insta content includes photos plus videos of her related to fitness and exercises.

She has shared an Insta photo with other fitness and web star Katie Austin in March of 2019.

Matthews is an animal lover. She owns two dogs Steel and Silver, a pit bull and a cane corse. They have their personal Instagram account which is followed by more than 115k followers.

Brittany who is a social media personality has not been in any huge scandals. Being a girlfriend of a popular football player, she has maintained a good image among the public.

This web star has an estimated net worth of $1 million. She and her boyfriend Patrick Mahomes II owns a house in Kansas which worth around $1.925 million.

Her partner’s net worth is estimated at $10 million.

Brittany Matthews has brown eyes and blonde hair. Her height is 5 ft 9 inches and her weight is 52 kg.

Brittany Matthews is active on Twitter since Nov 2011. She has around 71k followers.