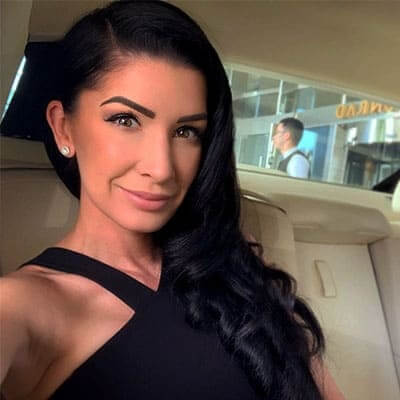 "I'm very excited. I'm also a little nervous too because it's a different experience, something new, especially when your body's changing. It's amazing what your body can do." ''My love, my rock, my best friend. Words will never express to you how much I love you!, Paul Nassiff.''

What is the relationship of Brittany Pattakos?

Nassiff is an expert in plastic surgery.

The two met at a medical meeting. At the time, Pattakos was studying nursing. Paul admitted in an interview that he didn’t expect anything to happen between them.

The couple went public with their relationship in 2018 via an Instagram post. They got engaged in June 2019 and by September 2019, the Nassifs tied the knot in Los Angeles after Paul proposed the love of his life romantically in a Duffy boat ride just a few days before his birthday.

Paul and Brittany got married on 28th September 2019 at St. Nicholas Antiochian Orthodox Church in LA in front of 70 guests. The couple then headed to Santorini, Greece, for the wedding reception. They chose that venue to celebrate their union and Pattakos’ roots.

In October 2019, the couple had their wedding reception at a beach resort in Santorini, Greece.

They welcomed a baby girl on October 13, 2020, and named her Paulina Anne Nassif.

Who is Brittany Pattakos?

Brittany Pattakos is the wife of the famous American plastic surgeon  Dr. Paul Nassiff. Pattakos works in the medical profession as a CoolSculpting specialist.

In addition to specializing in fat-freezing treatment, she is also a medical assistant.

She belongs of American nationality.

She has a sibling sister, named Jessica Pattako. They are identical twins.

Also, She has Greek ancestry.

As of Pattakos’s professional career, she works in the medical field just like her husband Paul Nassiff.

Pattako started her career as an ER Patient Care Technician at Phoenix Children’s Hospital in 2013.

Her passion for patient care led her to become a Medical Assistant for plastic and reconstructive surgery. She eventually fell in love with helping patients reach their aesthetic goals through Coolsculpting and became a certified specialist in 2016.

After several years of perfecting her craft and graduating from Coolsculpting University, she became a Master Coolsculpting Specialist in 2018.

How Much Does Brittany Pattako Earn?

The 29 years old cool sculpting specialist’s net worth is estimated to be around $500k USD as of 2022. Most of her earnings come from her medical profession.

Also, her husband has an impressive net worth of around $16 million. Apart from earning from his plastic surgeon profession, he also earns from appearing on shows like Botched (2014), Botched by Nature (2016), and The Real Housewives of Berverly Hills (2010).

Pattako has hazel eyes with long black hair. She is a fitness freak and has a curvy body. She is 5 feet and 9 inches tall and weighs around 59 Kg.

You may also know about the early life, professional career, and net worth of Tamra Judge, Ashley Biden, and Tara Narula.