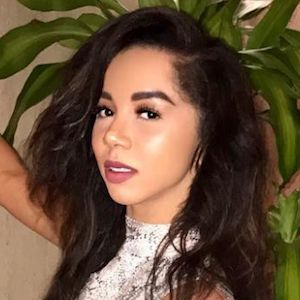 You can't rely on your child's father to provide for you. I never been about money. I provide for my child. I get $2,500 a month.

I tried to self-medicate without knowing the proper diagnosis. I didn’t have any problems and that became the problem

Authenticity is the practice of unlearning all the heavily-distorted, narrow-minded views of what you were told to be, and instead, being who you truly want to be.

What is the relationship of Brittany Renner?

Brittany Renner is possibly single as of now.

Brittany dated P.J. Washington in 2020 and the couple also welcomed a child in May 2021. However, the couple broke up.

In 2014, she had an alleged affair with football quarterback, Colin Kaepernick. Apart from that, rumors were that she was in a relationship with singer Trey Songz. It was back in 2014.

Although there is no exact confirmation of this affair, neither of them denied their secret relationship when asked in the media. So that gives a reason to believe that the relationship was real between them.

According to her interview with DJ Vlad in 2014, she was in a relationship with a guy for a long time. The guy’s name is Casey Therriault as per her fan’s speculation. Casey is also a fitness model and a social media star.

Together, they posted a lot of pictures on their Instagram. It was for around five years, however, now they don’t have the pictures together.

Who is Brittany Renner?

Brittany Renner is a sexy social media star and author. Additionally, she is also a fitness freak. Mostly, people know her for her fitness-related posts on her social media handles.

Previously, she used to play soccer during her college days. Usually, she uses the ‘#FitThickArmy’ and ‘brennerfitness’ in her social media posts.

Brittany Renner was born in Ocean Springs in the state of Mississippi. She was born on February 26, 1992. Discussing her ethnicity, she is half African-American and half Caucasian.

She has two siblings, Steven and Lexie. Although she was born in Mississippi, she later moved to Los Angeles, California.

During her childhood, she grew up with her brother and sister.

For her studies, she went to some middle and high schools. Afterward, she joined Jackson State University. There she played soccer and helped the team to win the ‘SWAC Championship’ in 2010.

Brittany Renner is a fitness model by profession. Although she played soccer during her college days, she chose a very different career path later. During the initial phase, she worked multiple jobs. She used to work as a salesgirl.

Similarly, she also worked as a hooter staff. Additionally, she also was a caregiver for some time. Later, she got into fitness. Eventually, she instructed Zumba to some Zumba students too for a small time. Her fitness posts grew bigger and bigger on social media.

Later, her fitness campaign got her a huge fan following on Instagram. She posted a lot of pictures of her fit and toned body on Instagram. This played a huge role in her success as a fitness model and a social media personality.

Additionally, she has her line of clothes and apparel like yoga pants, hoodies, leggings, and others.

Renner recently made an appearance on the podcast Off the Record with DJ Akademiks once again on January 20, 2022.

Brittany Renner became part of a controversy after hinting about her pregnancy with Colin Kaepernick. The post became a huge media buzz after Colin denied the statement.

Brittany Renner congratulates her ex-boyfriend P.J. Washington on his engagement to his pregnant fiancee, Alisah Chanel.

Brittany Renner has a fit and toned body. She is around 5 feet 4 inches and 55 kg. Accordingly, she maintains her weight via exercise and other fitness activities.

She has black hair, her eyes are brown. Her perfect-fit body measures close to 32-25-36 inches.

Brittany has a substantial social media following. On her Twitter and Facebook accounts, she has more than 475.9k and 124.2k fans respectively.

Her Snapchat username is Brittany Renner.

What is Brittany Renner known for?

She is popular for her online presence.

Is Brittany Renner dating anyone?

She is currently living a single life.
Sammie Rimando