MLB Brock Holt is married and a father of one.

He and his wife Lakyn met while he played in the minors. Then the two got married on November 9, 2013.

The couple has a son, Griffin Wyatt Holt, born in December 2016. 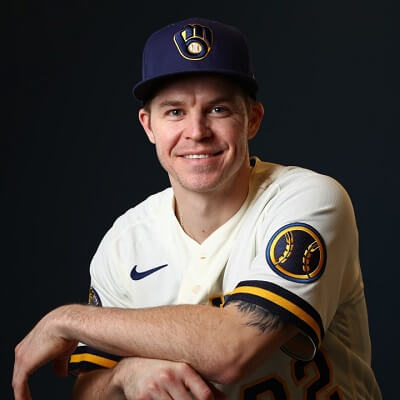 "He spiked my leg, cut it pretty good, but other than that, I was fine... I probably said something I probably shouldn’t have to start it off. I just wanted him to know it was a bad slide. I think he knows that now." "I’m not trying to get involved with any of those guys – not just (Giancarlo Stanton or Aaron Judge). They’ve got a pretty big team over there. It happened. Typical Red Sox-Yankees game – four hours long, and a couple of bench-clearing brawls. We’re right on track here."

Who is Brock Holt?

Brock Holt, also known by his nickname, The Brock Star, is an American baseball player.

He previously played for the Pittsburgh Pirates and Boston Red Sox.

Currently, he plays for the Milwaukee Brewers of Major League Baseball (MLB).

Holt worked with The Jimmy Fund, serving five consecutive seasons as Jimmy Fund captain for the Red Sox, to assist with fundraising and cancer awareness.

He graduated in 2006 from Stephenville High School in Texas.

In 2003, his freshman year, he made the District 8-4A All-District baseball team despite batting just .227 and shared the league’s Newcomer of the Year award. He was a second-team All-District 8-4A inclusion in his sophomore year, batting .324 for the season.

In 2005, Holt was named defensive player of the year in District 6-4A, and earned all-district honors in 2006, his senior year.

After transferring to Rice University in 2009, he posted a .348 batting average with 12 home runs and 43 RBIs in 59 games for the Rice Owls. He also led the Owls with 67 runs scored and shared the team lead with 11 stolen bases. In the same season, he was named both to the All-NCAA Regional Team and the All-Silver Glove Trophy Series team.

Holt began his professional career with the Pittsburgh Pirates’ short-season, Class-A affiliate, the State College Spikes. He began the 2011 season with the Pirates’ Double-A affiliate, the Altoona Curve. On July 13, 2011, Holt was named the MVP of the Eastern League All-Star Game after hitting a two-run homer in the ninth inning.

Holt opened in 2012 with Altoona and later joined Triple-A Indianapolis Indians. He was promoted to the Pittsburgh Pirates from the minors as the major league rosters expanded on September 1.

On February 19, 2020, Holt signed a one-year contract with the Milwaukee Brewers that included a club option for 2021.

Holt has brown hair with green eyes. He is 5 feet and 10 inches tall and weighs around 82 Kg.

You may also know about body measurements, net worth, and career of Dylan Bundy, Tim Salmon, Anthony Rendon, and Shane Greene.