WWE star Brock Lesnar is married and a mother of three.

Brock is a married man. He has been married to Rena Marlette Greek, popularly known as Sable. His wife, Sable is a model, actress, and retired professional wrestler.

The marriage ceremony took place on May 6, 2006. They have two children together named Turk and Duke, born on June 3, 2009, and July 21, 2010, respectively. Brock is also the father of his daughter, Mya Lynn from his ex-fiancé.

After getting married to Sable, he became stepfather to Sable’s daughter from her other marriage.

Presently, they live happily with their children in Maryfield, Saskatchewan. 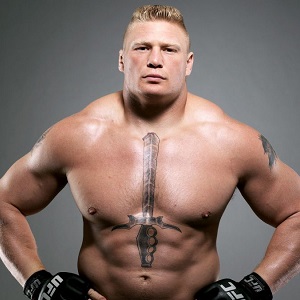 stay focused. Train hard and train smart. For me, the older I get, the smarter I have to train also, because the recovery time is longer. Work on everything: become a well-rounded fighter - don't just be good at one thing

be good at everything

It takes some balls to live life to the fullest

I am a private guy, and at the end of the day, I only really do care about my family. That's the most important thing: my way of life, my family. Whoever is in front of that is going to get hurt.

Who is Brock Lesnar?

Brock Lesnar was born as Brock Edward Lesnar is a professional wrestler and an American Football player. Additionally, he is a retired MMA amateur wrestler.

Although he has tried his career in MMA and American football, he is famous because of his WWE career. He has won the WWE Championship title four times and the title of “UFC Heavyweight Champion” for one time.

He holds the Guinness world record for “Youngest person to win the WWE Championship” at the age of 25 years and 44 days.

Brock Lesnar was born in the state of South Dakota on July 12, 1977. He is 44 years old. His ethnicity is of German descent and his nationality is American.

He was born to his parents, Richard(father) and Stephanie Lesnar(mother). His parents have owned a dairy farm. He grew up in his hometown. He has a sister named Brandi Nichol Lesnar. He has two brothers: Chad Lesnar and Troy Lesnar.

As per his education, he attended Webster High School. He mostly played football there. Afterward, he joined Bismarck State College for further education.

He played wrestling there and won the heavyweight wrestling championship. Furthermore, he joined the University of Minnesota on a wrestling scholarship.

Brock Lesnar is involved in multiple professions. As of now, he is a wrestler and an American football player. He played football during his high school days.

Later on, after his successful career in wrestling, he took a break from wrestling to play football. He was active in this field in 2004. But his football career was ruined after he suffered a groin injury from a motorbike accident.

Talking about his wrestling career, he played and won titles in wrestling from his college days. Brock moved towards his professional wrestling after signing with WWE in 2000.

Afterward, on March 18, 2002, he made his debut on WWE attacking other wrestlers during their match. At the age of 25, he won the title of “WWE Champion” defeating “The Rock”.

As per his professional MMA career, he has listed 5 wins out of 9.

Additionally, he has also won the title of “UFC Heavyweight Champion” by defeating Randy Couture. In 2016, he retired from MMA for the second time.

Brock Lesnar has a net worth of $25 million and his salary is $12 million per annum.

Brock is part of a large number of controversies until now. One of them was Brock blading himself to juice himself up during a match.

Additionally, back in 2001, police arrested him for use of steroids. Afterward, in 2016, there was a rumor that stated his suspension because of his controversial elbow hit on Randy Orton’s head. But he wasn’t suspended or fined.

Brock Lesnar has a height of 6 feet 3 inches. His body weighs 130kg. He has blonde hair and blue eyes.

Also get to know more about the birth facts, education, career, net worth, rumors, height, and social media of different personalities like Simone Garcia Johnson, Ric Flair, and Braun Strowman.