Talking about her relationship status, Brook Kerr is single and she is not dating anyone at the moment. Presently, she resides in Los Angeles.

However, she was previously married to Christopher Warren. Christopher is also a well-named actor. The couple married in 1990 and stayed for a long time together.

Brook was just 16 years old when she gave birth to Chris. However, they ended their long-term relationship in 2013 without disclosing any reason. 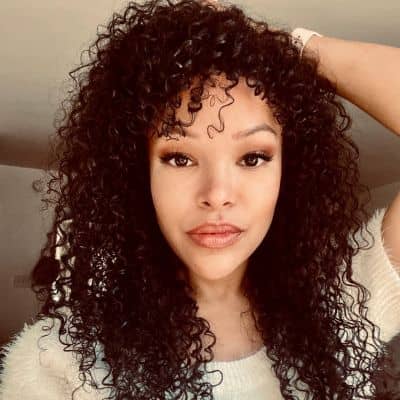 Who is Brook Kerr?

Brook Kerr is a well-recognized American actress and TV personality. Kerr is widely famed for her role on Passions(1999), True Blood (2008), and Prank (2000).

Further, she came into the limelight after portraying the role of Whitney Russel Harris on the famous television soap opera, Passions.

Brook Kerr was born on 21 November 1973. At present, her age is 47 years old. Likewise, her birthplace is Indianapolis, Indiana, the USA.

Brook is the daughter of her father, Rex Kerr whereas her mother’s details are still unrevealed till now. Moreover, she has two older half-brothers as well. Having said this, the actress has not mentioned her siblings’ details.

Talking about her nationality, Kerr holds an American identity whereas her ethnicity is African-American.

Regarding education, the actress has graduated from high school in Los Angeles. However, she has not disclosed her university details to the public.

Officially, Brook debuted by portraying the role of Whitney Russell Harris in the popular television soap opera, Passions. She debuted in 1999 and is regarded as one of its veteran stars. Kerr played the same role for 8 years before she decided to quit the character of Whitney on 6 September 2007 before the show featured its penultimate episode on NBC.

Likewise, Brook featured as Tara Thorton in 2008 in the unstarred first pilot of the HBO TV series True Blood. Tara is a fictional character in HBO featured, True Blood. It was created by Charlaine Harris and is the Southern Vampire Mystery series.

Later, the actress was afterward replaced by Rutina Wesley for the same role. Moreover, Brook also performed in Flower Girl in 2009. It was directed by Bradford May and written by Mark Rappaport.

Earlier, Brook has starred in Kenny Chesney‘s videos for his new singles “Everybody Wants to Go to Heaven”. Further, she also performed in 3T’s music video “Why” feat. Michael Jackson in the year 1995.

Freshly, Kerr joined the cast of General Hospital and she debuted on 5 March 2020. General Hospital is an American daytime soap opera. The soap opera is named in Guinness World Records as the longest-running American soap in production. Also, it is the second in American history after Guiding Light. It is created by Frank Hursley and Doris Hursley. Brook portrays the role of Dr. Portia Robinson.

Talented actress, Kerr has earned a huge amount of money from the acting and film industry. She has been working in her profession from 1999 till the present.

It is reported that Brook Kerr has an estimated net worth of $1 million.

However, the actress has not revealed her exact salary, earnings, and assets details till now.

Prominent star, Kerr has never been part of any controversial matter or rumors till now.

It seems that Brook prefers enjoying her personal life and does not want to merge it with her professional life. As of 2022, she has an estimated net worth of $1.3 million.

47 years old star, Brook Kerr has gorgeous looks as well as a charming personality. She stands at a height of 5 feet 3 inches. Also, she has a balanced body weight of 55 kg.

Furthermore, Kerr has dark brown eyes whereas her hair is black.

Nevertheless, the famous artist has never mentioned other physical details in the public yet.

Regarding her social media presence, Brook Kerr is an active personality on social media. Brook has more than 11.5k followers on her official Instagram account @brookkerr.

She is also active on Twitter with around 2.3k followers.

Nevertheless, Kerr is not available on Facebook at the moment.

How old is Brook Kerr?

Who's the actress that plays Portia on General Hospital?