Internet star Brooke Ashley Hall is married and a mother of three. 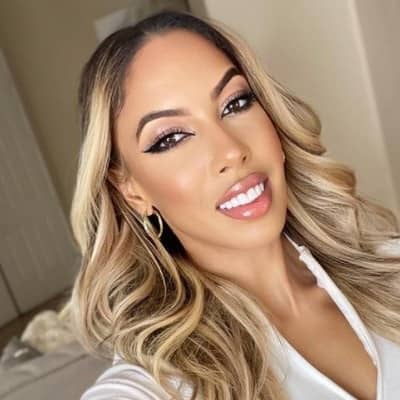 She is married to Marco Hall who is Boxer whom she has dated for a while. He is known as the stepfather to Braylon, Brooke’s son from the previous relationship.

The couple welcome their first son Cannon and they were also blessed with another son named Caedon in January 2021.

Who is Brooke Ashley Hall?

Brooke Ashley Hall is well known American TikTok Star and also an Instagram model and social Influencer who is better known for sharing her singing, dancing, prank videos, and lifestyle photos on different social platforms like Instagram and TikTok.

She is also known for sharing lifestyle vlogs and prank videos on a youtube channel of hers.

Brooke was born on April 19, 1993, in the united states with her family and relatives. She belongs to Multiracial ethnicity and holds American nationality.

Hall has not disclosed her family and siblings’ names to the public.

She has a huge fan following on social sites likes on Instagram with 948k followers, on Twitter she has 246 followers as she just joined in 2016, and on Tiktok she has 11.2M followers. She has not made a Facebook account under her name.

she also has YouTube channel name @BrookeHall with 143k subscribers.

Her every video is crossed by more than 100k regularly and she always gathers 26.1 million likes on her videos.

Hall began her adventure on social media platforms such as Instagram and TikTok by posting prank videos, cover songs, dancing videos, lip sync videos, and beautiful lifestyle images. Following that, she quickly rose to prominence on these platforms, with her videos gaining a large number of followers and likes. She also gained millions of fans on her TikTok as a result of this.

Similarly, she has a large fan base on Instagram, where she has used her celebrity to become a face and spokesperson for a variety of fashion, cosmetics, skincare, and swimwear businesses such as Olay, Fashion Nova, and many more.

Not only that, but she also used to upload a lot of videos to her YouTube accounts.

Till now she has not received any kinds of awards or nominations. Maybe in the future, she might receive one and she might share her achievement with the media.

Net worth of Brooke Ashley Hall

Her entire net worth is to be $1 million as of 2022. She is living her luxurious life in Las Vegas.

Her every source of income comes from her career. She has not to shred her salary and income per year to the media.

It was clear that there was a lot of incorrect information floating around involving people like Brooke Ashley Hall.

Brooke haters might fabricate lies and seek to bring her down out of jealousy and hatred. Brooke hasn’t given things much thought. She is constantly focused on positivity and love. She had stayed out of scandals till now.

She stands at a height of 5 feet 5 inches tall and weighs around 55kg.

looking at her appearance she has dark brown eyes and blonde hair. She often shares her modeling shots on Instagram. Brooke’s body measurements are 36-28-40 inches and wear a bra cup size of 36 C.