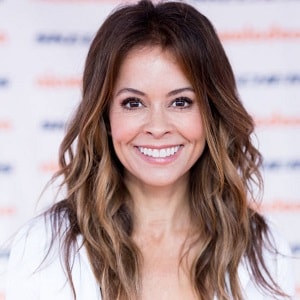 “When I was young, I wanted to do something innocuous, like becoming a drummer in a rock and roll band.”

Brooke Burke married to plastic surgeon Garth Fisher in 2001. They welcomed two daughters, Neriah and Sierra. The couple divorced in 2005.

Later, she dated singer and actor David Charvet in 2006. They welcomed a daughter, Heaven Rain in 2007 and a son, Shaya Braven in 2008. The couple married on August 12, 2011. Burke announced that she would be known as Brooke Burke-Charvet. They announced divorce after seven years of marriage in April 2018.

She announced she had thyroid cancer on November 8, 2012, and underwent surgery. Her cancer had been removed as she announced on December 12, 2012.

Who is Brooke Burke?

Brooke Burke is an American actress, model, dancer, and television personality. She is best known for featuring in ‘need for Speed: Underground 2’ as Rachel Teller, and as a Playboy model, and winning the seventh season of ‘Dancing with the Stars’.

She was born in Hartford, Connecticut, the USA on September 8, 1971. Her birth name is Brooke Lisa Burke and she is currently 47 years old. She was raised in Tucson, Arizona with two siblings, Donna and George Burke. Her father is of French and Irish descent and he left the family when Brooke was 2 years old. Her mother belongs to Portuguese background but she was adopted and raised Jewish.

Brooke was raised by her Armenian stepfather and she was also raised in the Jewish religion. Although, she celebrated Christmas. She holds American citizenship and her ethnicity is a mix of Irish, French, and Portuguese.

She made her exposure in the 1990s early modeling lingerie in the Hollywood catalog. She raised to fame after she hosted ‘Wild On!’ on the E! network from 1999 to 2002. She competed in the TV show host edition of ‘The Weakest Link’ in 2001 and was voted off in the second round. She hosted ‘Rock Star’ in which aspiring singers competed to front a rock band.

brooke hosted season 10 of Dancing with the stars by replacing Samantha Harris. She was announced on February 22, 2014, that she wouldn’t return to the show for its 18th season.

Along with Tiki Barber and Nancy O’Dell in 2009, she hosted NBC’s pre-show for the 66th Annual Golden Globe Awards. She hosted the third season of the TV Land series ‘She’s Got the Look’ in August 2010. With Chris Harrison, she co-hosted 2011, 2012, and 2013 Miss America pageant. She participated in the ‘The New Celebrity Apprentice’ but eliminated after twelve tasks, and finished in third place.

Brooke made her appearance in men’s magazines such as ‘maxim’, ‘Stuff’, ‘Playboy’, and ‘FHM’. She started a company ‘Baboosh Baby’ in 2007, which offers wraps for pregnant women.

She gave the voice role of Rachel Teller in the video game ‘Need for Speed: Underground 2’ in which she asks the ‘People and Places’ questions in the game ‘Trivial Pursuit Unhinged’.

She has performed in television commercials such as ‘Discover Card’, ‘Coca-Cola’, Anheuser- Busch’, ‘Skechers’, etc.

She also worked as a spokesperson for Kimberly-Clark subsidiary Poise incontinence products from 2016 to 2017.

She won season 7 of ‘Dancing with the Stars’ with her partner, Derek Hough.

She has an estimated net worth of $25 million and her main source of income is from her professional career.

There was a rumor that the reason behind the divorce of Brooke and David Charvet in that Brooke was caught in photos in which the man hugging Burke from behind and nuzzling her neck, which seems a bit beyond a platonic greeting.

Brooke Burke is dating a mysterious person after her divorce with David Charvet 5 months back!

Brooke Burke-the wonderful host, dancer, actress, TV host, and mother-of-four! Learn about her battle with melasma and her camouflaging techniques!