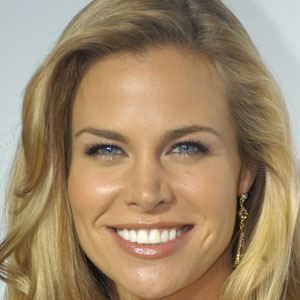 I love being a single mom. But it's definitely different when you're dating.

I'm a Southern girl. I like when they open the door and pull out a chair. I'm really into a man's man.

I would borrow my mom's red Borghese lipstick and smear it on like a clown!

What is the relationship of Brooke Burns?

Brooke Burns is a married woman. She married her second husband Gavin O’ Connor. He is a film director and they married on 22nd June 2013.

She gave birth to her daughter Declan Welles on 22nd January 2017.

Firstly, she met Julian McMahon. he is the son of the former Prime Minister of Australia. He has appeared in WB Charmed as Cole Turner. They fell in love and married on 22nd December 1999.

Similarly, she gave birth to their daughter Madison Elizabeth on 9th June 2000. Later, he cheated on Brooke and they divorced in 2011.

After that, she started dating Bruce Willis and engaged in April 2004. However, they split a month later.

Who is Brooke Burns?

Brooke Burns is a game show host, actress, and TV personality. She is known for being the cast of the action drama series Baywatch. Her romance with Bruce Willis and Julian McMahon was the talk of the tinsel town.

She was born on 16th March 1978 in Dallas, Texas, U.S. She is the daughter of Brad Burns(father) and Betsy Burns(mother).

Similarly, she grew up with two sisters. Her nationality is American whereas her ethnicity is mixed(English and Scottish).

From an early age, she used to be a ballet dancer as she danced for 12 years starting from age three.

Likewise, she had a dream of becoming a ballerina which could not be possible because when she was 14 years old, she had a skiing accident so she had to give up her dream. She also trained in swimming, boating, and fishing.

After her accident, her mother thought of sending her to modeling school. Within a year, she featured in both US and European fashion magazines.

She began her career in the year 1995, portraying the supporting character Peg in the Spanish-American teen sitcom Out of the Blue. Similarly, she appeared in all episodes but gained little notoriety.

Later she won recognition in the year 1998 when she joined the cast of the action drama series Baywatch alongside David Hasselhoff and Kelly Packard. It was her breakthrough role and the character was Jassie Owens.

Likewise, she starred in Baywatch: Hawaii alongside Simmone Jade Mackinnon, Stacy Kamano, and David Hasselhoff. But she left the show due to her pregnancy.

Later she returned to television and guest-starred in the NBC sitcom Just Shoot Me!. Similarly, she had a major role in the American soap opera North Shore as she appeared in 21 episodes.

Also, she hosted the NBC game show Dog Eat Dog. Likewise, she hosted Hole in the Wall and the GSN quiz show The Chase.

Furthermore, she appeared in the romantic comedy Shallow Hal, and the mockbuster disaster Titanic II. it was a parodical illustration of James Cameron‘s Titanic and the drama Where Hope Grows.

Brooke Burns has been nominated for awards twice but she has not received any awards yet. In the year 2003, she was nominated for Choice TV Reality/Variety Host for Dog Eat Dog.

Similarly, she was nominated for the Outstanding Game Show Host for The Chase in the year 2016.

As per 2022’s data, her estimated net worth is around $5 million similarly, she earns over $50,000 per year being a fashion model. Most of her earnings are from her role in Baywatch.

Brooke Burns has not been into any controversies and rumors as she keeps her life private.

Talking about the body measurements, she has a height of 5 feet 8 inches and weighs around 60kg.

Her body measurements are 36-23-35 inches. Similarly, she has long blonde hair and blue color eyes.

You may also like to read about education, early life, career, affairs, body stat, and social media of Erika Eleniak, Hayley Hasselhoff, and Traci Bingham