Brooke Hyland is an American social media star and has millions of followers. She loves clicking selfies and uploading. Brooke is currently dating Nolan Betts.

The young and talented American Musical.ly Star and a Social media personality, Brooke Hyland is currently an unmarried personality. She is in a relationship. She is having an affair with Nolan Betts.

Her boyfriend, Nolan is an Instagram star. They are high school sweethearts. The couple is deeply in love with each other. And soon they might take their relationship to the net level. 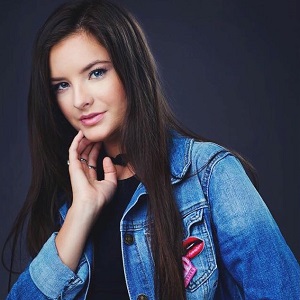 Who is Brooke Hyland?

Brooke Hyland is a singer as well as a dancer. She was a contestant in the lifetime hit reality television show “Dance Moms”. She also performs on the show with her sister Paige.

The young and talented 19 years old girl was born on 20th January 1998. She lived with her parents, Kelly Hyland and Randy Hyland in  Murrysville, Pennsylvania, United States.

She is the oldest of her two siblings, one sister(Paige Hyland) and one brother(Josh Hyland). Her nationality is American and ethnicity is mixed(English, Irish, German, French).

In 2016, she had completed her high school at Franklin Regional High School and now she is studying at Ohio University.

Brooke Hyland had started her career in singing as well as dancing. She had a platform, “Dance Moms” where she along with her mom had shown her talent. She also sings and has released many of the songs on the Youtube. Her fan followers have reached 3.2 million in Instagram.

She had briefly quit dancing to pursue cheerleading but eventually, she found out that cheerleading wasn’t as much fun as she thought, and returned to dance. As she is exploring her talent recently there aren’t much information about her professional life.

Unlike other celebrities, there is no information about the love life of Brooke Hyland and her professional life as well.