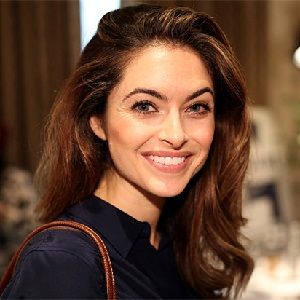 The American actress, Brooke Lyons is currently in a marital relationship with a film producer Max Osswald. Brooke and Max got married on April 26, 2014, after a short timed love affair. It’s been three years for Brooke and Max’s marriage but, they do not have any children yet.  Talking about the past relationship of Brooke Lyons, there is no any information about the love affairs of Brooke in which she was actively involved.

Who is Brooke Lyons?

Brooke Lyons is an American actress who is immensely eminent for her work as an actress in the 2008 film ‘Welcome Home Roscoe Jenkins’ portraying the role of Amy.

She is also known for playing the role of Peach Landis in the CBS Sitcom ‘2 Broke girls’.

Brooke Lyon was born to surgeon James R. Lyons and dancer Penny A. in Washington, D.C, United States of America. She was born on November 8, 1980, and was raised in Fairfield and New Haven, Connecticut and some other towns of USA. From the very early age of life, Brooke Lyons was involved in various Ballet Dance training but, due to her suffering from scoliosis, she could not continue her dancing passion. Earlier, she studied dance at the Joffrey Ballet School, the New England Ballet School in Connecticut and after her diagnosis, she formed the Connecticut Scoliosis Association whereby, she mentioned her experience of suffering from Scoliosis. She attended Yale University and majored in ‘English Literature’. She was also a member of “Arts and Letters” Manuscript Society.

Brooke Lyons initiated her career as a learner at ‘The Groundlings’ in Los Angeles. Firstly, she was just a voice actor for the play ‘Rumors’ which was followed by her work as a member of a production team of ‘The Maids’ and ‘Heartbreak House’. Brooke appeared in some of the Television series including ‘American Dreams’, ‘That’s So Raven’, along with ‘Jane by Design’. Among all her appearances, she is most famous for her role as Amy in the  2008 film ‘Welcome Home Roscoe Jenkins’. She also played for ‘To Sonnets’ and the television film ‘A Deadly Adoption’ which are Max Osswald’s Productions. With the help of her talents and appearances, she got a handful amount of money as her salary per episode raising her net worth to a decent peak.

Once, there was a rumor that she is about to marry the film producer Max Osswald but, this news was soon confirmed by the couple with their marriage ceremony. She has not been into any major controversy in her professional or private life.