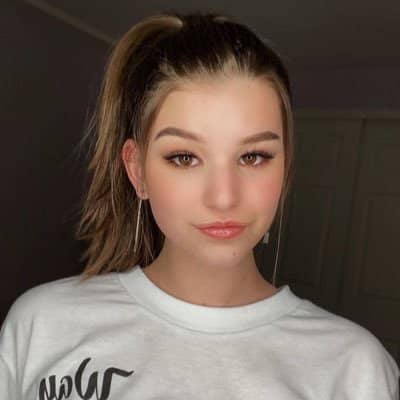 Brooke Monk is dating a guy named Sam Dezz. They started going out in October 2020. Looking at their social media handle, the couple is quite open about their affair.

Brooke often shares photos and videos with her boyfriend on her IG handle.

Who is Brooke Monk?

Brooke Monk is an American YouTube Content Creator, and Social Media Personality. She is best known for having immense popularity on TikTok.

Besides that, Brooke is also known for the makeup and other fun videos that she uploads to her self-titled YouTube channel.

Brooke was born on January 31, 2003, in Jacksonville, Florida, United States. Much information about her family is not disclosed. Brooke is a devout Christian.

Her mother’s name is Amy Monk. She has five siblings Brynna, Blaize, Breanne, Brett, and Audra. On February 10, 2020, she shared a group of pictures with her sister, Audra. Audra is a dancer.

Brooke once told that she was fond of makeup from her childhood and wanted to use them ever since she was little.

Talking about her education, it seems that she has been homeschooled. Regarding her nationality it is American and she belongs to Anglo-Scottish ethnicity.

Brooke Monk is now one of the popular social media personalities who has gained fame in a short span of time.

In the November 2019 YouTube Q&A video, she declared that she had a few hundred thousand followers. As of the summer of 2020, that number has multiplied gaining up to 400K subscribers with over 1M viewers.

Brooke started creating content on TikTok in September of 2019 and in just a span of 5 months she gained 3 million followers. As of now, she has over 11M followers.

She usually uploads different entertaining dances, lip-syncs, and comedy videos. In a video, she was imitating her parents trying to interpret a meme.

Besides all these, Brooke also sings songs and singles. Further, she has collaborated with various other users also.

Brooke has her own merch on tSocialClub. At the moment, she mostly sells custom-made T-shirts, hoodies, and other accessories with various stickers and prints from tcsocialclub.com.

The prices of the merchandise range from $15 – $40 which is very affordable and gets ‘sold out’ time and again.

Moreover, she also endorses many brands over her Instagram.

In a Q&A video, she candidly said that she has no plans for the future at the moment. Taking her time, she may build something worthwhile and long-lasting from her social media success.

Being just in her teens, she has built a great career through social media. With the growing popularity, her net worth is growing rapidly although, its exact amount is unknown.

Brooke also has her own merch on tSocialClub. The prices of the merchandise range from $15 – $40 and receives good sales.

Further, she owns a Mercedes Benz car. Hence, she must have good earning and is living a lavish lifestyle.

Brooke has managed to be out of all of the rumors or controversy till now.

Brooke Monk stands average with a height of 5 ft 4 inches (159 cm) and weighs around 56 kg (123.5 lbs). She has hazel eyes and light brown dyed to blonde colored hair.

Brooke has maintained a perfect figure with a waist measurement of 24 in and hips 33 in. Moreover, her shoe size is 4(UK).

Her Snapchat id is @brookemonk2021. Further, her email id is [email protected]

Also, get to know the bio of other Social Media personalities like YourPalRoss, JR Stuber, JayDa Youngan, and Scott Stuber.