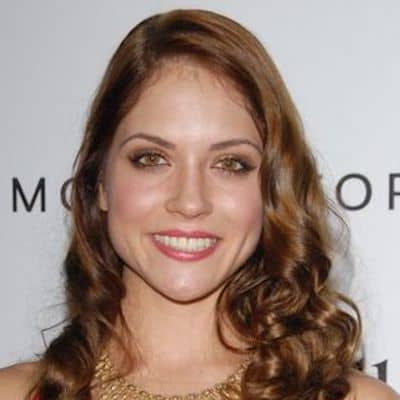 With drama, you know if you're having a true moment, but in comedy, if somebody doesn't laugh, then you know you're not being funny. That's a really fun challenge, and that's what draws me to comedy

I don't think anybody in my graduating class would have figured that I would be doing full-on single-camera comedies or sitcoms, or anything like that, but it certainly has been a part of my career

Sci-fi fans really have a commitment to the characters even as much as the actors do. There's a synergy between making television and who gets to watch it.

Brooke Nevin at the present time is in a relationship. She is dating a guy named Michael Traynor.

Her boyfriend is a musician and he has more than 66k followers on Instagram.

On 2021’s Valentine’s day, she shared adorable pictures of themselves captioning funny valentine.

Who is Brooke Nevin?

Brooke Nevin is a Canadian actress. She is mostly known for her acting in Animorphs, Breakout Kings, Call Me Fitz, etc.

Two of her movies, It Takes a Christmas Village and Meet Me in New York are waiting for release.

Her birthdate is 22 Dec 1982 and the place she was born is Toronto, Ontario, Canada as Brooke Candice Nevin. The name of her mother is Monique Nevin and her father is Bob (retired hockey player).

Similarly, Brooke’s ancestry is Caucasian, and has a younger sister named Kaleigh Nevin.

As per her academics, she attended Leaside High School.

Brooke Nevin is a popular actress who has appeared in several TV and movies. Her first movie was titled Short for Nothing in 1998.

Recently, in 2021, she was seen as Jessica in Construction. Her other big-screen projects are,

Moreover, Brooke was seen in the TV series, Animorphs as Rachel Berenson, Imaginary Bitches as Brooke, and Call Me Fitz as Sonja Lester.

Her other notable TV presence can be seen in,

According to the sources of 2021, she has a net worth of around $1 million (estimated). The yearly salary received by her is under the rug.

This talented actress is keeping herself away from scandals as well as rumors.

Brooke Nevin’s height is 5 ft 4.5 inches and her body weight is 50 kg. Furthermore, she has brown eyes and has hair in brown color.