Actor-model Brooke Valentine is married and a mother of two. 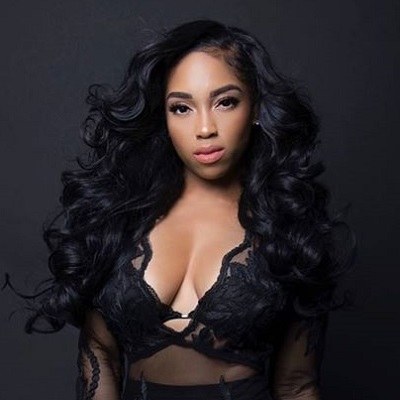 I always say, "When you know it's right, everything will fall into place." If people wanted to fight me-because of my hair or because my skin was too dark-then I fought them

What is the relationship of Brooke Valentine?

Brooke Valentine is a married woman. Her husband is a songwriter, Marcus Black.

The couple got engaged in July 2018. Later, they got married in a very private ceremony including their close friends and family members in 2019.

Together, they welcomed their daughter, Chi (born June 2019). Last, she shared the video where Chi was taking her first steps in her eighth month.

Previously, Brooke was in a relationship with the basketball player, Akbar Abdul-Ahad. From her earlier relationship, she has a son, London. London is suffering from group disorder, cerebral palsy.

Who is Brooke Valentine?

Brooke Valentine is a singer, actress, and model. She is renowned for her debut album, Girlfight.

Last, in 2018, she appeared in the Reality-TV series, Love & Hip Hop: Hollywood.

Brooke Valentine was born as Kanesha Nichole Brookes on the 5th of October 1984 in Houston, Texas. She is of British-Scottish ethnicity.

To date, she has not shared any details on her mother and father. She is the eldest among her two siblings.

As a child, she grew as a tomboy. Also, she used to get into lots of fights too. Later, when she was in grade five, she discovered her passion for singing. Being an extrovert, she was never shy to perform in front of her classmates.

With her age, her passion for singing was also increasing. Moving forwards, when she was in High School, she was determined to be a singer by profession.

After graduating from high school, she joined the female group, Best Kept Secret. At the same time, she got in contact with the producer, CEO Deja the Great.

Brooke Valentine’s debut in the music industry with the single, Girlfight with the Virgin Recording label. The single peaked at the 70th position in the US Billboard’s yearly chart. After that, she released her debut album, Chain Letter which also became an instant hit.

Moving forwards, she worked for the album, Physical Education. However, the album was put on hold due to the merger of Virgin Records and Capitol Records. The mixtape was released in 2009.

Later, in 2010, through an interview, she made an announcement stating that she would like to take a break from writing music for other artists. Last, in 2013, she launched her latest EP titled Love Letters.

Apart from being a singer and songwriter, she is also a talented actress. Later, in 2017, she made her appearance as a cast member of the show, Love & Hip Hop: Hollywood.

Also, she is a model. As a model, she is associated with the store, Fashion Nova. Through her Instagram post, she promotes the brand.

Apart from that, the royalties of her music are also a major source of her income.

To date, she has managed to remain far from any type of controversy that created a buzz in the media. Also, she is not involved in any rumors too.

Brooke Valentine has black eyes with black hair. She stands at a height of 5 feet 2 inches and weighs around 56 kg. Her body measurements are 34-24-29 inches.

You may also read the bio of Avery Singer, Ramona Singer, and Marty Singer.