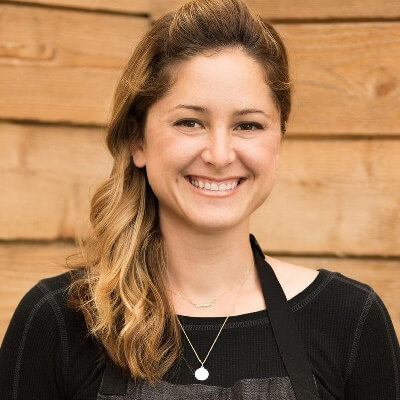 Brooke Williamson is a happily married woman. She is married to Nick Roberts. Her husband is a fellow chef and the co-owner of all her restaurants. The couple met while both of them worked at ‘Zax’ about 18 years ago. They exchanged wedding vows in 2007 and have a son named Hudson.

The lovely couple has now been married for around 12 years. Both of them share their passion for cooking. The couple is now very successful business owners owning six ventures in America. They intend to grow together and grow their business together and create an empire.

Who is Brooke Williamson?

Brooke Williamson is an American chef and TV personality. She is the winner of Top Chef season 14 and is the co-owner and co-chef of five restaurants, Hudson House, The Tripel, Playa Provisions, Da KikoKiko, and Small Batch Ice Cream.

Brooke Williamson was born as Brooke Elliot Williamson on 15 August 1978 in Los Angeles, California, the United States of America. As of 2020, her age is 42. She was born to American parents but has not revealed their identities. Also, there is no information about her siblings and other family members.

There is no information about her educational background. She has not revealed her school, college, or university. However, she does seem to be well-educated.

Brooke Williamson started her culinary career as a teacher’s assistant at the Epicurean Institute of Los Angeles, followed by her first kitchen position as a pastry assistant at Fenix at the Argyle Hotel.

Her quality and passion were noticed by Chef Michael McCarty and he brought him to the nationally acclaimed restaurant Michael’s of Santa Monica where she worked her way up and became their youngest sous chef.

A couple of years later, she became the executive chef at the Los Angeles restaurant, Boxer. Following that, she opened ‘Zax‘ as Executive Chef and started developing her signature California-inspired cuisine. While at Zax, she also met Nick Roberts, her current husband, and business partner.

A couple of years later, the couple opened Amuse Café in Venice and Beechwood restaurant which earned them the title of “Rising Star Chefs” from StarChefs in 2004.

However, both of them are now closed. In 2009, they opened ‘Hudson House‘, an elevated gastropub in Redondo Beach. A couple of years later, they opened The Tripel, a modern American, and craft beer dining destination.

Most recently, they have opened their second Small Batch ice cream shop in the family-friendly neighborhood of Mar Vista.

Moreover, she has also participated in other national shows including ‘Top Chef Duels’, ‘Knife Fight‘ (which she won), and became the host and mentor of MTV’s ‘House of Food’.

Brooke Williamson has an estimated net worth in the region of $1 million to $5 million. Also, as the winner of Top Chef season 13, she earned $125,000 prize money. She now owns five restaurants. An average restaurant owner in America earns around $60,000 a year.

There are no rumors about her. Also, she has not been a part of controversies. She is very focused on her career and has a great passion for cooking. She has followed her passion and has not done anything controversial to harm her image or reputation. All her colleagues and followers love her.

You may also like to read the Bio, Career, Body Measurements, Net Worth, Social Media, Relationships, and more about Sandra Lee, Chris Santos, Noah Galuten