My dad's always taught me how to do stuff on my own; I'm studying art and photography, like film and digital - a mix of both; I'm kind of selective of the people that I take photos of. Like, I don't take pictures of just my friends, but I do like taking pictures of just some of my close mates, especially out in L.A. 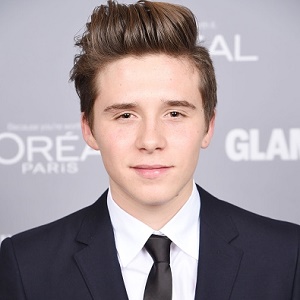 Brooklyn Beckham is in a relationship. He is dating an actress named Nicola Peltz. They started to see each other from late 2019.

Recently in March 2020, due to the Coronavirus, this couple was seen together where Brooklyn was doing the makeup of Nicole.

Brooklyn was also linked with Lexi Wood in 2018 for a short time.

Who is Brooklyn Beckham?

Brooklyn Beckham is a British model and photographer. He is one of the children of famous soccer player David Beckham and fashionista Victoria Beckham.

He was born on 4 March 1999, in West End, England, as Brooklyn Joseph Beckham. His ethnicity is mixed (English, Jewish, and German).

He is the eldest one with three younger siblings, Romeo, Cruz, and Harper.

Talking about his education, he went to Parsons School of Design in Greenwich Village.

Brooklyn Beckham, being from a family of modeling and football talent, running in his veins, from an early age, has featured in TV documentaries The Real Beckham and Victoria Beckham.

He has made his modeling debut on “Man About Town” magazine in March 2014. After this, he was featured in overs of magazines like for Vogue China, Miss Vogue, Interview, L’Uomo Vogue, T: The New York Times Style Magazine, and Dazed Korea.

He was first seen on television at the age of three. As a photographer, he shot for the campaign of Burberry BRIT.

This TV star’s estimated net worth is $1 million. He was chosen by a brand like Huawei Honor 8 Android phones to appear in their advertisements.

Also, this couple has $4 million of a house in the South of France.

When Brooklyn was hired at age of 16 by Burberry to shoot the latest fashion then there were controversies that he got it through nepotism.

Brooklyn Beckham has brown eyes with brown hair. He has a height of 5 feet and 9 inches and has a weight of 70 kg.