Brooklyn McKnight is an American YouTuber and singer. Brooklyn is currently single. 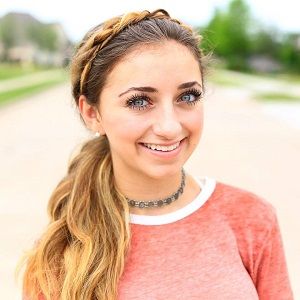 What is the relationship of Brooklyn McKnight?

The 18-year-old American YouTuber, Brooklyn is currently single. Previously, she was in a relationship with Parker Johnson in 2016.

However, they couldn’t handle their relationship for so long and broke up later in 2017. It has been a couple of months, she is single.

Furthermore, she has never been spotted with any other man and has never been involved in any affairs. Currently, Brooklyn is enjoying her single life and living beautifully.

Who is Brooklyn McKnight?

Brooklyn McKnight is an American YouTuber and singer who runs a YouTube channel named Brooklyn and Bailey along with her sister.

Currently, Brooklyn and Bailey has amassed over 4.8 million subscribers and earned more than 600 million views.

In addition, they have also launched a couple of songs on which Dance Like Me reached No. 26  for the most popular song and No. 12 for pop US song on iTunes.

Brooklyn was born on December 31, 1999, in the United States of America. Talking about her nationality, she is American and her ethnicity is unknown.

As a child, she developed her interest in fashion and YouTube. She has a twin sister Bailey McKnight brother Daxton and three sisters Kamri Noel, Paisley, and Rylan.

Bailey and Brooklyn’s videos started to come when they were just 18 months old. She is the daughter of Shaun McKnight and YouTuber mother Mindy McKnight.

Brooklyn began her career as a YouTuber along with her twin sister Bailey. She began to feature on the YouTube channel ‘CuteGirlsHairstyles’ when she was only 18 months old.

At that time, her mom used to do different hairstyles and post them on her YouTube channel. Later in 2012, Brooklyn along with her twin sister Bailey created a YouTube channel named Brooklyn and Bailey.

Currently, Brooklyn and Bailey has amassed over 4.8 million subscribers and earned more than 600 million views. Some of her most watched videos are IDENTICAL TWINS Get Wisdom Teeth REMOVED, 2015 Polar Bear Plunge, The Smoothie Challenge, and “Get Ready With Us” HOMECOMING 2015, Meet Our Baby Sister, and The BEAN BOOZLED Jelly Bean Challenge.

Additionally, they were also named as one of the “13 up-and-coming YouTube stars you should be followed by Business Insider.

Furthermore, she is also an Instagram star with more than 3 million followers followed by 352k followers on Twitter, and almost 394k followers on Facebook. Back in 2017, Brooklyn and Bailey partnered with music producer Benny Cassette.

Their first track was Dance Like Me which climbed to No. 26  for the most popular song and No. 12 for pop US song on iTunes. Furthermore, they have also launched a couple of songs including Simple Things and What We’re Made of.

Being a famous YouTuber and singer, she earns a healthy amount of money from her profession. Currently, she has a net worth of $3.5 million as of 2022. However, there is no information regarding her salary.

As of now, she has not received any awards in her career. Although, she has gotten a Streamy Award nomination for her YouTube channel.

As she has full focus on her career, Brooklyn has never been involved in any controversial stuff.

Brooklyn has a height of 5 feet 3 inches and her weight is unknown.

Moreover, she has a pair of gorgeous greenish blue eyes and brown hair. Besides this, there is not any information regarding her other body measurements.

Additionally, she also holds a YouTube channel on which she has amassed over 4.8 million subscribers.