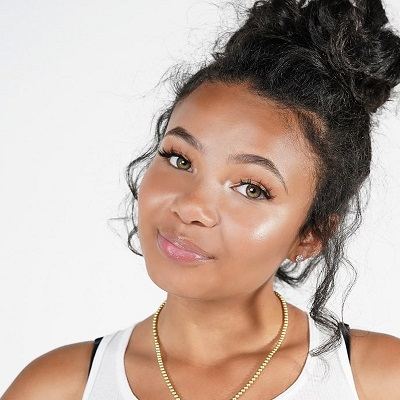 Brooklyn Queen’s current relationship status is possibly single. Till date, she has not introduced anybody as her boyfriend or crush.

Till date, she has not shared any details on her previous relationship and dating history. As of now, she is focused on her career as a rapper.

Who is Brooklyn Queen?

American Brooklyn Queen is an uprising rapper and YouTuber. She is renowned for her song, Keke Taught Me that went viral on YouTube.

Brooklyn Queen was born on the 3rd of July 2005 in Detroit, Michigan, United States. She is of All-American ethnicity. As of 2020, she is 15 years old. Also, her zodiac sign is Cancer.

She is the daughter of Nailtorious Kim. Her mother is a nail technician and rapper but her father’s details are not disclosed. She has a brother. He goes with the name, dyson121 on TikTok.

Details on her academics are not known. However, some online sources claimed that she is homeschooled.

Since childhood, Brooklyn Queen was greatly influenced by her mother. Hence, she always found herself more inclined towards music. Also, she happens to be talented since the early days. She was just five years old when she wrote her first song.

The talent of Queen was first noticed by her mother who inspired her to follow her passion. Later, when she became eight years old, she recorded her first song.

Later, the rapper signed with the BMB Entertainment and released her video, Keke Taught Me. The video featuring the comedian Eastside Ivo became an instant hit with millions of views in the no time.

The same year, she launched her debut album, Queens Corner with the 9 tracks. The list of the track includes the songs like Pretty Girl Stuff, No Gimmicks, Appreciation, and Keke Taught Me. After that, she released the numerous songs in the including he singles like Beat the Baby, Feeling So Wavy, and Rich Girl Problems.

In the way to make such singles, she has collaborated with the rappers like Salt-N-Peppa and Rob Base. Apart from that, she is also extremely popular on YouTube too. Her YouTube videos are based on her music. However, she also uploads vlogs on the channel.

Currently, she has 1.07 million subscribers on YouTube with more than 255.3k views. Besides YouTube, she is also active on SoundCloud with around 7.8k followers.

Last, on the 8th of Septemeber 2020, she launched her song, Trying To Breathe that has around 27.4k plays in the current date.

Also, she makes through the royalties of her music.

Brooklyn Queen has brown eyes with brunette hair. However, she sometimes prefers to color her hair to pink. She stands at a height of 5 feet 2 inches and weighs around 48 kg.

Till the date, she has not been part of any type of controversy that has caused a buzz in the media. Also, she has managed to maintain distance from any sort of rumors.

You may also read the bio of Flo Milli, Ugly God, and Momma Dee.