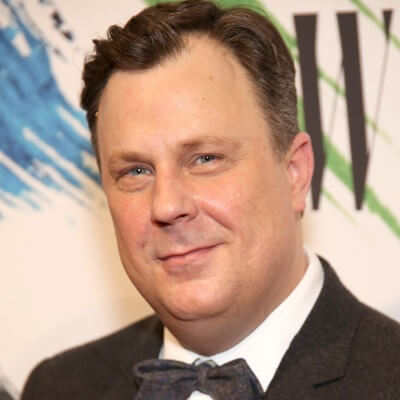 Brooks Ashmanskas is homosexual. However, he has not revealed any of his partners so far and currently seems to be single.

He is very private regarding his personal life and is also not active on any social media sites. There is no infroamtion about any of his past affairs.

Brooks Ashmanskas is an American stage actor. He is best known for his work in the musicals, ‘Martin Short: Fame Becomes Me’, ‘The Prom’, and more.

Brooks started performing from an early age. He portrayed Barnum in Barnum when he was just 15. He came out as gay at an early age and his parents were very supportive of him.

Ashmanskas spent his childhood days in Portland, Oregon. His ethnicity is Caucasian.

Talking about his educational background, he is a graduate of Bennington College.

Brooks entered the musical world in the mid-1990s with the original productions of Dream, Songs for a New World, and the Broadway revival of Gypsy: A Musical Fable. Since 2004, he featured in The Producers.

In 1999, he appeared in the production of Animal Crackers. He portrayed several characters in the Broadway, Martin Short: Fame Becomes Me in 2006. For his performance, he earned a Tony Award nomination. A year later, he performed at the Huntington Theatre Company in Present Laughter. The same year, he appeared in The Ritz as Chris and in She Loves Me in 2008.

In 2010, he portrayed Mr. Dobitch in Promises, Promises. The same year, he also made an appearance in Present Laughter. In 2014, he appeared in Bullets Over Broadway. A year later, he appeared in Something Rotten! on Broadway.

In 2018, he portrayed Barry Glickman in the original Broadway, The Prom. For this performance, he received yet another Tony Nomination

In 2020, he appeared in the Off-Broadway production, Joseph and the Amazing Technicolor Dreamcoat. He portrayed ‘Baker’.

How much is Brooks Ashmanskas worth?

Brooks Ashmanskas has an estimated net worth of around $800k. His main source of income is his career as a stage actor. A Broadway performer’s average annual salary is around $61k so he might also earn a similar amount.

Brooks has not been involved in any controversies. He has kept himself away from any type of controversy and scandal. So far, he has not done anything controversial in his career. He is a well-respected stage actor. Similarly, there are no rumors about him of any kind.

Ashmanskas has brown hair and a pair of blue eyes. He stands at a height of 6 feet. There is no information about his weight and other body measurements.

You may also like to read the Bio, Career, Body Measurements, Net Worth, Social Media, Relationships, and more about Slade Smiley, Carvin Winans, Nick Cordero, and more.