Bruce Abbott’s current marital status is married. He married Kathleen Quinlan who is also a well-known actress. She is the second wife of Abbott.

The couple met on the set of the television film, Trapped. Then, they tied the knot on the 12th of April, 1994, and they are together ever since. Together the pair have a son named Tyler Quinlan who was born on October 17, 1990.

Previously, he was married to Linda Hamilton on December 19, 1982. Linda is also an actress by profession. The pair have also a child a son Dalton Bruce who was born on October 4, 1989.

Dalton was also an actor whom we can see in Terminator 2: Judgement Day as Infant John Connor. However, the couple later separated and divorced on December 28, 1989. 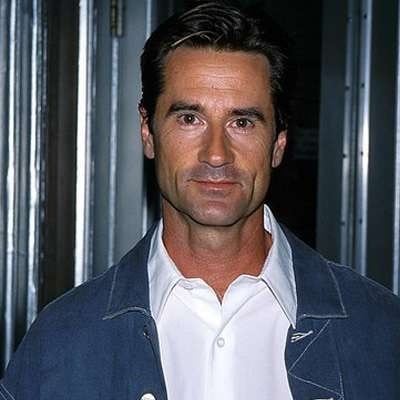 Who is Bruce Abbott?

Bruce Abbott is a well-recognized American stage, film, and television actor. He is best known for his role as Dr. Dan Cain in the cult sci-fi horror films Re-Animator and in Bride of Re-Animator.

Currently, he is an architect and artist who works in the custom-design industry. As of now, he has designed more than 20 homes.

Bruce was born in Portland, Oregon, the U.S. on July 28, 1954. The actor’s full name is Bruce Paul Abbott. He is of American nationality and belongs of Caucasian descent.

The actor hasn’t yet disclosed his family details to the public including his Father, Mother, and siblings. As of 2021, Bruce is 66 years old and his Zodiac sign is Leo.

Talking about his academics, he attended the Davis Douglas High School and graduated in 1972.

Then, he enrolled at the Portland State University. At that time, he also joined the Oregon Shakespeare in Ashland, Oregon, and spent his three-season performing as a dancer and actor from 1975 to 1978 in numerous production like A Winter’s Tale, All’s Well That Ends Well, Henry VI Part 2, and so on.

In 1980, Abbott relocated from Portland to Hollywood and joined the American Conservatory Theater in San Francisco, California.

Bruce made his on-screen debut in the year 1982, he was cast in the role of Loren Gersh in the film, Tag: The Assassination Game starring Robert Carradine and Linda Hamilton.

That same year, he made appearances in the miniseries, The Blue and the Gray where he portrayed the role of Jake Hale Jr. Abbott made his career big break after he was cast in Stuart Gordon’s sci-film Re-Animator as Dr. Dan Cain. Similarly, he reprised his role in the sequel Bride of Re-Animator in 1989.

From 1988-1990, he featured in the episodes of Beauty and the Beast where he portrayed the role of Devin Wells. Moreover, he appeared in the horror sequel The Prophecy II along in 1996 with Christopher Walken and Brittany Murphy.

Some of his notable film and television series are enlisted below in the table,

However, Abbott had already semi-retired from acting but he starred in the 2021 short movie, Psycho Re-Animated where he was cast in the role of Milton Arbogast/Dan Cain.

To date, Abbott has not been part of any sorts of rumors and disputes that create headlines in the media. Also, he stays miles away from such controversial acts that could hamper his professional and personal life.

Bruce hasn’t yet revealed the exact figure of his income so, there is no information available regarding his net worth, salary, and other assets. However, he might have earned a fair amount of wealth throughout his successful acting career.

Talking about his now-wife net worth, she has an estimated net worth of around $6 million.

The actor stands at the height of 6 feet and his weight is around 86 kg. She has a beautiful green pair of eyes with brown hair color. Further, his other body measurement is not available.

Abbott is active on Instagram under the username @fadedaristocracy where he has nearly 245 followers. Moreover, he is not available on other social media sites including Facebook and Twitter.