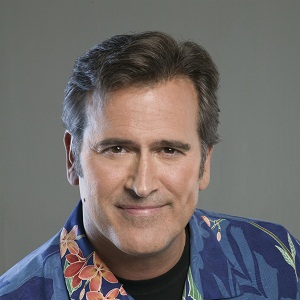 When life gives you lemons, throw them at the zombies

All men think they're fascinating. In my case, it's justified

For a long time I was embarrassed to say I was a 'B' movie actor, ... But now that I see what Hollywood's putting out, I realized 'B' actually means 'better.'

Bruce Campbell is married to Ida Gearon. She is a costume designer. They currently live in Jacksonville, Oregon.

They first met during the shooting of movie Mindwrap and they exchanged vows on 22 Feb 1991.

Before this, he was married to Christine Deveau from 1983 to 1989. They have two children, Rebecca and Andy.

Who is Bruce Campbell?

Bruce Campbell is an American actor and producer. In addition, he is also a writer, comedian, and director.

He was born Bruce Lorne Campbell on 22 June 1958 in Royal Oak, Michigan, USA. His ethnicity is a mix of Scottish and English.

He was the son of Joanne Louise (mother) and Charles Newton Campbell (father). His father was an amateur actor.

Bruce has an older brother, Don, and an older half-brother, Michael Rendine.

He studied at Groves High School.

Bruce Campbell used to act as a teenager. Then he started to make short Super 8 movies with friends. With his friends, he made the first Evil Dead film, titled Within the Woods, which was initially used to attract investors.

Then he was featured in 5 comics of the series Marvel Zombies vs. Army of Darkness.

He has appeared in Raimi’s films outside of the Evil Dead series, notably having cameos in the director’s Spider-Man film series. He appeared in Maniac Cop and Maniac Cop 2 plus in his own movie My Name is Bruce.

He also took part as a voice actor in several video game titles. He produced the voice of Ash in the three games based on the Evil Dead film series: Evil Dead: Hail to the King, Evil Dead: A Fistful of Boomstick, and Evil Dead: Regeneration.

On August 24, 2002, he wrote an autobiography, If Chins Could Kill: Confessions of a B Movie Actor. Next, he wrote the second book Make Love! The Bruce Campbell Way. Finally, in 2016  he launched his third book Hail to Chin.

In 2017 and 2018, Bruce appeared in movies Highly Functional as Chili and Dark Ascension as a man respectively.

The estimated net worth of this actor is around $10 million. His cameo movie Oz the Great and Powerful (2013) has collected an amount of $493 million at the box office.

As per the reports, an experienced director’s and actor’s yearly salary is around $140k and $19k-$210k respectively.

Talking about the rumors of this multi-talented actor, there are no desperate rumors regarding his personal and professional life.