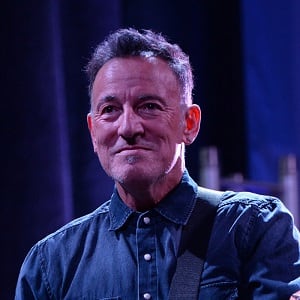 Until I realized that rock music was my connection to the rest of the human race, I felt like I was dying, for some reason, and I didn't know why.

When it comes to luck, you make your own.

When I was growing up, there were two things that were unpopular in my house. One was me, and the other was my guitar.

You know the old saying: Trust the art, not the artist. I think that's true. I think somebody can do real good work and be a fool in a variety of ways.

Adult life is dealing with an enormous amount of questions that don't have answers. So I let the mystery settle into my music. I don't deny anything, I don't advocate anything, I just live with it.

Bruce married actress and model, Julianne Phillips on 13 May 1985. The marriage came to an end after Julianne filed for divorce on August 30, 1988. Their divorce was settled on March 1, 1989.

Currently, Bruce is married to singer-songwriter Patti Scialfa. The pair had a private marriage ceremony on June 8, 1991, at their Los Angeles home.

Who is Bruce Springsteen?

Bruce Springsteen is an American singer-songwriter. People mostly know him for his work with the E Street Band. His most successful studio albums are ‘Born to Run’ and ‘Born in the U.S.A.’

His mother was a legal secretary and his mother was a bus driver. He developed a keen interest in the world of music since his childhood years and enjoyed playing guitar from an early age.

He is of American nationality. Furthermore, he belongs to the mixed ethnic background of Irish, Dutch, and Italian/Sicilian.

His second album was titled ‘The Wild, The Innocent, & The E Street Shuffle’. Additionally, he released a third album, ‘Born to Run’ in 1975. The album peaked at No. 3 on the Billboard 200.

Since then, Bruce has released several other albums like ‘The River’, ‘Nebraska’, ‘Tunnel of Love’, ‘Human Touch’, ‘Lucky Town’, ‘The Ghost of Tom Joad’, ‘The Rising’, ‘We Shall Overcome: The Seeger Sessions’, and ‘Working on a Dream’ among others.

Springsteen has also appeared in the TV show ‘Lilyhammer’. He has 60 credits as a composer, 276 credits for soundtracks, and 10 credits as a producer. He made his Broadway debut in ‘Springsteen on Broadway’ in 2017. Springsteen is also active in politics. He campaigned for President Obama’s re-election in 2012.

Springsteen has garnered two BAFTA Film Award nominations. In addition, he has won the EDA Special Mention Award and Richard Harris Award. All in all, he has 12 wins and 18 nominations to his name to date.

His salary is unknown but he has net worth of $500 million.

Springsteen’s political stand on several occasions has been criticized numerous times. He made the news in 2016 after he pulled out of North Carolina over the anti-LGBT law.

Additionally, the New York City Police Department Patrolmen called for a boycott of Springsteen’s shows in 2000 due to his song ‘American Skin (41 Shots)’. At present, there are no rumors concerning his life and career.

Talking about his body measurement, Bruce Springsteen has a height of 5 feet 9½ inches or 176.5 cm. Additionally, he weighs around 72 kg or 158.5 lbs.

Furthermore, his hair color is Salt & Pepper and his eye color is dark brown.

Story That Is Inspiring!! Dwayne ‘The Rock’ Johnson Shared A Story On His Instagram Account While Praising New Doc ‘The Defiant Ones’