Bruce Willis is a TV and movie actor who is also a producer, and singer. He is the father of five childrens.

Bruce Willis and Emma Heming have been married for 9 years since 21st Mar 2009. The marriage wasn’t done according to the legal procedure and was not legally accepted. So the couple again decides to perform their wedding and has it again in a civil ceremony in Beverly Hills, six days later.

At the premiere for the film Stakeout, Willis met actress Demi Moore. They married on November 21, 1987. They also had also three daughters: first named Rumer who was born on August 16, 1988. Likewise, they welcome their second daughter Scout on born July 20, 1991, and Tallulah on February 3, 1994.

Willis and Moore announced their separation on June 24, 1998. They filed for divorce on October 18, 2000, and on that same day, the divorce was finalized. Then after Bruce Willis has been engaged to Brooke Burns in 2003. They were happily living but no sooner were separated in 2004.

Bruce has been in relationships with Karen McDougal in 2007, and in 2005 with Aida Yespica and Lindsay Lohan. Again it was that he was in relation to Kim Cattrall in 2003, Emily Sandberg in 2002, Nadia Bjorlin in 2002.

Rachel Hunter was also in the relationship with Willis from 2001 to 2002, again with Alisha Klass in 2000 but broke up in 2001, Maria Bravo in 1999, moreover also with Janice Dickinson and Estella Warren. Bruce Willis is rumored to be dating Lisa Barbuscia. 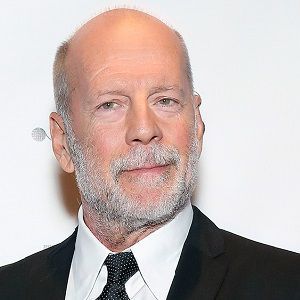 You can't undo the past... but you can certainly not repeat it.

I'm much more proud of being a father than being an actor.

Who is Bruce Willis?

Bruce Willis’s real name is Walter Bruce Willis. He is a talented television and movie actor famous for playing different roles. He is famous as an American actor, producer, and singer.

Bruce has appeared in different hits films that have grossed in excess of $2.5 billion US. And he is the actor that has been placed at the top ten stars.

Due to the Coronavirus, this actor is also following the rule of staying at home. He along with his ex-wife Demi and their daughters were in Idaho.

Later, they were joined by Bruce’s wife Emma and their two children. They are all now staying at Hailey, Idaho.

Willis was born on March 19, 1955, Idar-Oberstein, Rhineland-Palatinate, West Germany. He is now 63 old years. His ethnicity is Mixed(English, Dutch, French, Welsh, Irish, and German) and his nationality is American.

He has a sister, Florence Willis. His family moved to the U.S. after he was born. He was raised in Penns Grove, New Jersey. There his mother worked at a bank and his father worked in the factory after being discharged from the army in 1957.

He went to Penns Grove High School. Being a popular student, he was elected the student council president.

He also went to Montclair State University to study drama. However, he left during his junior year to pursue his acting career in New York City.

After completing high school Bruce Willis took up menial jobs being a security guard at the Salem Nuclear Power Plant and as a private investigator. He was seeking the job and finally, he got a chance to perform in the off-Broadway production ‘Heaven and Earth’ in 1977.  After that, he started to perform stage appearances and has played the lead role in ‘Bullpen’.

So he became to perform various other stage performances and was seen playing the role of David Addison in the television series ‘Moonlighting’. He was able to perform in this drama beating 3000 other contenders. The series ran from 1985 to 1989 and it was the main reason that made Willis a star.

After that, He started to come out debuting in various movies. In 1987  he was seen in a romantic comedy film named ‘Blind Date’ and has started his acting career. In the movie ‘Die Hard’ in 1988, he played the police officer John McClane and was able to make his career so strong as his role of action hero was loved by all. He played the role of John McClane in the 1990 movie ‘Die Hard 2’.

But it was again in the rising form with the comeback of black comedy and crime film ‘Pulp Fiction’ in 1994.  He was also seen playing in ‘Armageddon’ which was released in 1998. The film was so hit and became the highest-grossing film of the year.

Then he also started to host different shows and hosted Saturday Night Live with Katy Perry as a musical guest on October 12, 2013. Willis will star in the movie adaptation of the video game Kane & Lynch: Dead Men, named Kane & Lynch.

Willis’s work is appreciated by all and he is one of the greatest actors. He has won a variety of awards up to now. Likewise, he has received various honors throughout his career in television and film.

In 1986/87: Emmy and Golden Globe Awards for Moonlighting
1994: Maxim magazine ranked his sex scene in Color of Night the No. 1 sex scene in film history
1998: Golden Raspberry Award (Worst Actor) for Armageddon, Mercury Rising, and The Siege
1998: Blockbuster Entertainment Award
2000: Blockbuster Entertainment Awards and the People’s Choice Award
2000:  Awarded for Outstanding Guest Actor in a Comedy Series for Friends
2002: The Hasty Pudding Man of the Year award
2002: Selected as a national spokesman for Children in Foster Care by President George W. Bush
2006: Honored by the French government for his contributions to the film industry
2006: Honored with a star on the Hollywood Walk of Fame on October 16
2011: Inducted into the New Jersey Hall of Fame
2013: Promoted by French Minister of Culture Aurélie Filippetti

Bruce has done a lot of movies, shows, and has succeeded with great success. His net worth is $255 million as of 2022.

Bruce doesn’t have many infamous rumors. But he has been involved in different controversies after having his film flopped continuously and when he was replaced in his career by others. But again he gains his success when his other film hits the success.

Bruce Willis is physically fit and tall with a height of 6 feet. He weighs 83 kg (183 pounds). His chest size is 44inches and his waist is 34inches likewise biceps are 14 inches.

His shoe size is 10 US. He has grey hair and green-colored eyes.

Bruce Willis reunites with wife and children finally! Find out his net worth and properties