Bryan Tanaka is an unmarried man till now. He has not been in many relationships in his life. He dated the famous American singer and songwriter Mariah Carey for a few months in 2017.

The couple began dating each other at the end of 2016. The couple broke up after a few months of their affair. The news of their separation came out at the start of April 2017. According to the records, he is single at the present time. 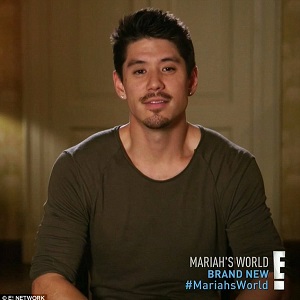 Who is Bryan Tanaka?

Bryan Tanaka is an American dancer and choreographer. He is widely known as a faculty member at the Millennium Dance Complex. He has performed at award shows like the Grammys and the MTV Video Music Awards.

He’s graced the stage with artists like Rihanna and Mariah Carey and appeared in countless music videos. He is also a professional Tae Kwan Do player.

Bryan Tanaka was born on April 11, 1983, in Lacey, Washington, United States. His nationality is American but his ethnicity is Half-Asian and Hawaiian.

His educational background has not been disclosed yet. He was interested in dancing since his childhood age. He has learned Tae Kwan Do and earned a black belt in Tae Kwan Do at the age of twelve years.

Bryan began his professional dance career when he was eighteen years old. His first work was in the Entourage series on the American channel HBO. He has performed in major music awards such as Grammy, MTV Video Music Awards, and European Music Awards.

In addition to choreographer and dancer, Bryan also acts as a model and actor, having already conducted advertising campaigns for Nike, Pepsi, McDonald’s, Old Navy, and iPod. In early 2010, he created, directed, choreographed, and starred in the trilogy “Hook vs. Bridge” with songs by Kevin Cosson.

Bryan’s first single, Bounce was released in 2014. That same year, he was the artistic director and choreographer of the Nike Maxim Awards that took place at the company’s headquarters in Portland.

He also performed with Madonna at the Grammy Awards and Brit Music Awards in 2015. At the end of 2016, he began working as a creative director and choreographer for the famous American singer and songwriter Mariah Carey until their breakup at the beginning of April 2017.

He was nominated for the Best Choreography Award at the 2010 MTV Video Music Awards for “Video Phone.”

His income and salary have not been disclosed to the media. Furthermore, he has an estimated net worth of $5ook.

Moving towards his body measurements, he has brown hair color and his eye color is also brown. Moreover, he is 6ft. 1 inch tall at height and weighs 80 kg.

Are Bryan Tanaka and Mariah still together?

What is Bryan Tanaka famous for?

Starting From Dinner Date To PDA Mariah Carey and Bryan Tanaka Has It All!