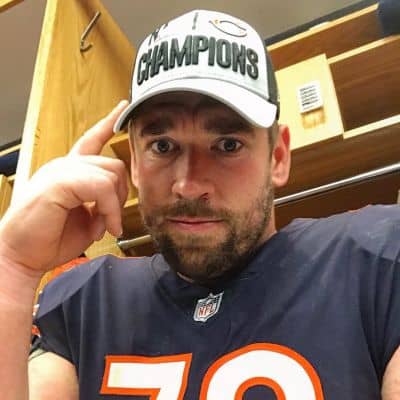 Talking about his relationship details, Bryan Witzmann is possibly single and he might not be dating anyone at the moment. He seems to be busy with his career and professional life.

Moreover, Bryan has not mentioned his relationship details and related news on public and media. He has kept his personal profile low-key.

Who is Bryan Witzmann?

Moreover, he has also made his appearance in The Bachelorette.

Bryan Witzmann was born on 16 June 1990. At present, he is 31 years young star. Likewise, his birthplace is Houlton, Wisconsin, the USA.

Not much is known about his father and mother’s details, Bryan has been secretive towards his family details. Moreover, he has mentioned his sibling’s information in the public.

Talking about his nationality, Witzmann holds an American identity whereas his ethnicity is Caucasian.

Bryan is a professional NFL player and started playing his professional college football career at South Dakota State University. Initially, he was placed on injured reserve on 2 August 2014 and was later set free by the Texans in 2015.

Moreover, Witzman signed a one-year contract extension with chiefs through 2018. He played in 16 games in 2017 starting 13 at left guard for the Chiefs. The athlete however left the club and joined Minnesota Vikings on 10 September 2018. He also appeared for Chicago Bears and appeared in the starting right guard in Week 10, and began 7 games.

Till now, he has played for the teams like Cleveland Browns, Miami Dolphins, Carolina Panthers, and Atlanta Falcons. Bryan then became part of the popular American show, The Bachelorette in season 18.

The cast consists of Bryan, Joe, Clayton, and Clinton. It had 35 contestants at the beginning that was revealed on 26 July 2021. However, Witzmann was eliminated in episode 2 of the show along with Brandon K., Bryan, Edward, Garrett, Jack, Jo Marri, and Ryan.

A well-known personality, Witzmann has earned a decent amount of money from his profession. He lives a quality lifestyle along with his family.

It is reported that Bryan Witzmann has an estimated net worth of $100k-$500k.

Bryan has never been part of any controversial matter or rumors till now. The athlete has been preoccupied with his professional and private life.

It seems that Witzmann prefers enjoying his personal life and does not want to merge it with his professional life.

31 years young athlete, Bryan has handsome looks and an admirable personality. He stands at a height of 6feet 7inches. Also, he has a balanced body weight of 145 kg.

Furthermore, Witzmann has light brown eyes whereas his hair is brown.

Regarding his social media presence, Bryan Witzmann is an active personality on social media. Bryan has more than 8.9k followers on his official Instagram account @witz76.

He is also active on Twitter with around 3.5k followers.