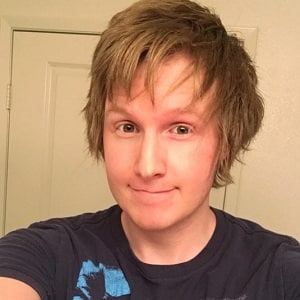 BryanStars (Bryan Odell) is openly gay. He came out as gay on February 11, 2017. At present, he is believed to be dating another YouTuber, Robbie.

Who is BryanStars (Bryan Odell)?

BryanStars (Bryan Odell) is an American YouTube personality, artist manager, and musician. People mostly know him for his BryanStars Interviews series. To date, he has interviewed several popular artists including Asking Alexandria, Black Veil Brides, and Falling in Reverse.

Odell was born in Sendai, Miyagi Prefecture, Japan on May 22, 1990. Until the age of eight, he lived as a student in Japan. Later, he moved to Nebraska. He is of American nationality. Furthermore, there is no detailed information available regarding his ethnic background at present.

Talking about his education, Odell graduated from Lincoln East High School in 2008. Additionally, he attended the University of Nebraska and majored in Broadcast Journalism. Later, he dropped out after two years to focus on his YouTube channel.

While in high school, Odell filmed a documentary that successfully aired on C-SPAN. He has since then interviewed several popular artists. Some of the bands and artists that he has interviewed include Panic At The Disco, Twenty One Pilots, Pierce the Veil, Black Veil Brides, Suicide Silence, Disturbed, Bullet For My Valentine, Cannibal Corpse, The Ready Set, One Ok Rock, Motionless In White, Pierce the Veil, Cody Simpson, G-Eazy, Michael Buckley, Shane Dawson, and Dave Days among others. Furthermore, Odell released his first album ‘Follow Your Dreams’ in 2016.

Odell has been featured in The Huffington Post, Kerrang, The New York Times, The Hollywood Reporter, Alternative Press Magazine, and USA Today. Additionally, he has also been involved in projects like Warped YouTube Program and My Digital Escape. He started the ‘BryanStars Tour’ in 2012. The tour featured bands including SayWeCanFly, Modern Day Escape, and Farewell, My Love among others.

Odell garnered the Shorty Award nomination in 2014. Additionally, his blog was named the ‘Best Music Blog’ in Alternative Press Magazine.

Odell has not revealed his current salary. Furthermore, there are no details available about his estimated net worth at present.

Odell became part of a controversy due to the Never Shout Never incident on June 3, 2012. In the interview, Christofer Drew Ingle called Bryan “a joke” and his questions “bullshit”. Ingle later apologized for his behavior. Additionally, the negative comments of the members of My Digital Escape about Bryan were also controversies. At present, there are no rumors concerning Odell and his career.

Talking about his body measurement, there are no details available about Odell’s height and weight. His hair color is blonde and his eye color is dark brown.