Young and handsome social media star Bryce Hall is only 18 years old. He is too young to be in a relationship with someone.

Being so young, he has not been in any relationship till and it seems like he is sharpening his strength and skills to make his all dreams come true rather than being stuck in a relationship. 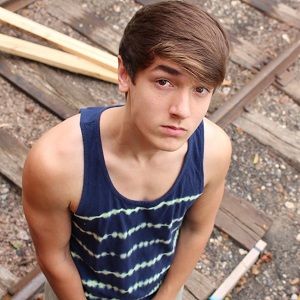 Who is Bryce Hall?

Bryce Hall is a young American social media star. He is best known for his ibrycehall musical.ly account, where he has earned over 1.1 million fans.

He has collaborated with popular users such as Whynot_Joey and Loren Beech on the app.

Bryce Hall was born on August 14, 2000, in Ellicott City, Maryland. There is no any information about his parents. He has not disclosed anything about his childhood life.

His educational background is also unknown. Hall regularly goes to the gym and he loves the workout.

His nationality is American and he is of Native American ethnicity. He has a dog named Cici.

Hall started to gain popularity on various social media accounts in 2014. He became quite famous on the photo-sharing site Instagram where he would post photos of himself, sometimes with friends.

He is also very active on other social media. His success online earned him a spot on the Press Play Tour. He has more than 160,000 followers on YouNow.

Bryce also posts vine videos on YouTube and has earned more than 30,000 followers on Vine.

He collaborated with Kyle Stewart on a Vine called “friends.” He is also known for his ibrycehall musical.ly account. Bryce he has earned over 2 million fans on musical.ly. His net worth is unknown.

Currently, there are no desperate rumors regarding his personal and professional life. Hall got involved in a major controversy during his Press Play Tour in August 2015.

He, however, got kicked out of the tour soon for not following rules. Apparently, his behavior during the tour made some girls uncomfortable, which led to his removal.

He has a height of 5 feet 11 inches with body weight 68 kg. He has brown hair color and his eye color is brown.

Why was Bryce Hall trolled for being titled sexy by People Magazine?