MLB player Bryce Harper is married and a father of two.

Bryce Harper’s current relationship status is married. He married his girlfriend Kayla Varner who is a Soccer player.

The couple got engaged in May 2014. The couple did not married at the planned time. Later, it was announced that they have broken up. However, they reconciled and tied their relationship on 17th December 2016 at the San Diego California Temple. They shared the beautiful bond of their relationship in each social media.

The couple has children a boy and a girl. They welcomed their first child on August 22, 2019, a boy named Krew Aron Harper. On December 11, 2020, they had a second child a girl, Brooklyn Elizabeth Harper named after her grandmas. 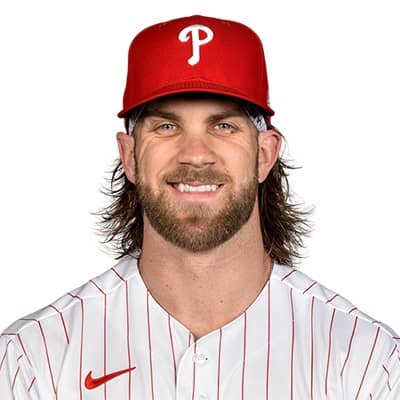 Who is Bryce Harper?

Bryce Harper is an American Sports player. He is a professional baseball right fielder for the Philadelphia Phillies and Washington Nationals of the MLB.

On March 1, 2019, he signed a 13 year, $330 million contract with the Phillies which is the richest contract in the history of North American sports in sports history.

Bryce was born on October 16, 1992, in Las Vegas, Nevada, United States. As of 2020, he is 28 years old. His Zodiac sign is Libra. He holds an American Nationality and belongs to the Caucasian ethnicity. His full name is Bryce Aron Max Harper.

Bryce is the son of Ron Harper and Sheri Harper. He has a sibling brother named Bryan Harper who is also a baseball player and a sister named Brittany Harper-Peterson.

Bryce attended his high school in Las Vegas High School, Nevada. He graduated from the College of Southern Nevada of the SWAC in the NJCAA. He played as a Catcher in college.

Bryce made an impression with his 31 home runs which broke the school’s previous record of 12. Then, he was named the SWAC Player in 2010.

Bryce Harper started his career with the Washington Nationals before signing with the Phillies after 2018.

He was selected by the Washington Nationals in the 2010 draft. At the college level, he played Catcher but he was told to play the outfield to become a more well-rounded player before making his MLB debut.

Bryce was selected for the 2012 All-Star Game at the age of 19 years old, becoming the youngest position player to perform in the team.

In 2015, He tied for the NL lead in home runs where he hit the longest home run of his MLB career- a 461-foot hit and became the NL Most Valuable Player by unanimous decision.

After becoming a free agent in 2019, He signed with the Philadelphia Phillies where he chooses to wear no. 3 with the club. He also features in the TV Show, In the Night Castle in 2013. The baseball player collaborates with UnderArmour.

Bryce Harper has been honored with several awards and nominations throughout his career as a baseball player in:

He has also been nominated for the Best Male Athlete ESPY Award, Kid’s Choice Sports Award for favorite Newcomer.

In 2018, He involved in a massive brawl that attacks San Francisco Giants pitcher Hunter Strickland and caused serious injuries for various team members and he was also suspended for four games.

Bryce Harper is one of the highest-paid athletes where he earned an estimated net worth is $70 m US as of 2020. Between June 2018 and June 2019, he earned $45 million from various endeavors.