Renowned as Briger of the movie, Counterfeiters. 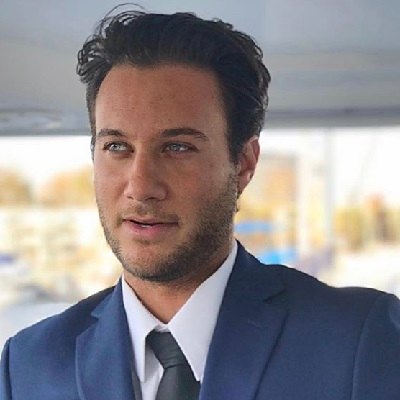 Previously, he was dating the social media star, Nicole O’Brien. The former couple starting dating when he appeared in the dating show, Too Hot to Handle. However, they beak up their budding relationship at the start of COVID-19.

Despite the breakup, they share a good friendship with each other.

Who is Bryce Hirschberg?

American Bryce Hirschberg is a multiple award-winning rising filmmaker and actor. He is renowned as Briger of the movie, Counterfeiters.

Last, in 2020, he appeared in the reality TV dating show, Too Hot to Handle.

Bryce Hirschberg was born on 24th May 1990 in La Jolla, California, United States. His birth name is Bryce David Hirschberg. He is of Jewish-Germanic ethnicity.

To the date, he has not shared any details on his family background including his father, mother, and siblings.

Talking about his education, he happens to be a graduate of Loyola Marymount University. In 2012, he graduate from the University with Honors in Flim Production minor in Film Studies. At the University, he received Cosgrove Family Distinguished Visting Artist Endowment Scholarship.

Prior to that, he completed his High School education from the Aliso Niguel High School.

After graduating from the Hgh School, Bryce Hirschberg started his career as the Office Manager of Loyola Marymount University. During the senior year, he entered the American Film Institute as a creative intern.

At the time, he produced, directed, and edited the short movies, Counterfeiters, and Baer. For the short, he won the Awards like Grand Winner, Festival Prize, Copper Wing Award, and Award of merit. Through the short, he built a reputation in the entertainment world.

Following that, he joined the Signet Media Group as an associate producer. For the media house, he was responsible for developing projects. Moving forward, in February 2015, he joined the digital and social media manager for the Bright Living.

Later, in 2017, he made his appearance in his first feature-length film, Counterfeiters. In the movie, he portrayed the character of the Young man, Bridger who was trying to save his dying mother. He happens to be the director, producer, editor, sound designer of the movie. The movie became one of the milestones of his career.

In 2020, he appeared in the Netflix’s dating show, Too Hot to Handle as a contestant.

Apart from that, he also earns as a producer and editor.

Bryce Hirschberg has green eyes with brunette hair. He stands at a height of 6 feet and has a decent weight with a slightly built body type.

Talking about his appearance, he has a charming look with ab oval-shaped facial features. Besides that, he prefers to have slightly grown facial hair.

He has not been through any sort of controversy and scandals that created a buzz in the media. Besides that, there are no rumors linked with him.

He also has a self-titled YouTube channel with over 1.78k subscribers and more than 89.2k views.

You may also read the bio of Gavin O’Connor, Justin Chatwin, and Storm Keating.