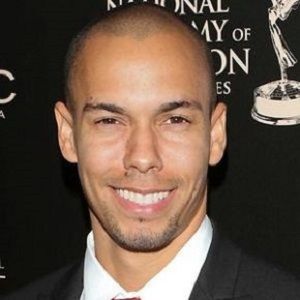 I couldn’t feel any luckier to have Brytni as my castmate.

Bryton James is having an affair with Brytni Sarpy since May 2019. His girlfriend Brytni is an American actress. The couple is The Young and the Restless co-stars. They are in a live-in relationship and quarantining together in this pandemic. Moreover, the couple loves hiking together.

Previously, he was married to Ashley Leisinger. They dated each other for several years before their marriage. After years of their love affair, the couple got married on 16 March 2011.

The couple divorced on 20 February 2014. There is no record of his children till now. After his divorce from Ashley, he has not been in any relationship till now. He is divorced from Ashley but he said they are still close friends.

Who is Bryton James?

Bryton James is an American actor, voice artist, and singer. He began his career as a child actor.

He is best known for playing Devon Hamilton on the CBS soap opera, The Young and the Restless (2004-present).

Bryton has completed over 500 episodes in the TV series, The Young and the Restless. He is also popular for voicing Virgil Hawkins in Young Justice (2013-present).

Bryton James was born Bryton Eric McClure on 17 August 1986, in Lakewood, California, USA. James is an American by nationality and is of African-American ethnicity.

His father, Eric McClure was a musician, songwriter, and music producer. His father was an African-American and his mother was a Native American. He grew up in Fullerton, California. He was interested in acting since his childhood age. The Young and the Restless star started in the show business when he was two years old.

There is no information on his educational history.

James began his career as a child artist at the age of two. He appeared in commercials and magazine ads, including one with singer Michael Jackson. At the age of four, he began portraying Richie Crawford on the sitcom Family Matters. He appeared on the series from 1990 to 1997 in over 200 episodes. Further, he was cast as the series regular for the role of Devon Hamilton on the CBS soap opera, The Young and the Restless in 2004.

He won the “2007 Daytime Emmy Award for Outstanding Younger Actor in a Drama Series.” He was nominated for the same award in 2006 and 2008.

Moreover, he was nominated for the “NAACP Image Award for Outstanding Actor in a Daytime Drama Series” in 2005 and 2008 and won the award in 2009. He still plays the role in the series. He voices Virgil Hawkins/Static in Young Justice (2013-present).

James previously worked as a recording artist and performed on Disney Channel and other U.S. and international networks. He is a spokesperson for many charitable organizations.

Besides, he founded RADD (Recording Artists, Actors, and Athletes Against Drunk Driving) in 1996. He also won the Michael Landon Award for charitable work through youth in entertainment.

He has accumulated a net worth of 2 million dollars. But there is no information regarding his salary.

Bryton James has a height of 5 feet 7 inches. His body weight is 75 kg. Besides this, he has olive skin tone, black hair, and black eyes.