As per the sources, Bryton Myler is currently single and is not dating anyone. He is dedicated and focused on his career and studies rather than involving in love relationships.

Moreover, On November 24, 2019, he posted a video titled,” Song Lyric Prank on my Crush”, on his personal Youtube channel. 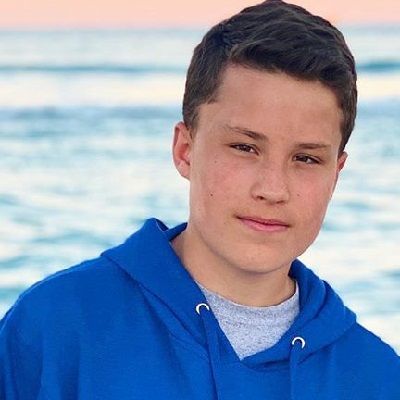 Who is Bryton Myler?

Bryton Myler is a popular American Youtuber, child actor, martial artist, and gymnast. He is known for portraying the role of Bulk in the series, Ninja Kid’s Power Rangers which aired on Ninja Kids TV. He also has appeared in Proper Manors and The Last Straw.

Bryton Myler was born in the United States of America on February 27, 2004. Myler is 17 years old as of 2022 and maintains an American nationality. His ethnicity is Caucasian and as per the astrologer, Pisces is his birth zodiac sign.

Shane Myler and Aly Myler are his parents. His both parents are the founder of Ninja Kids TV. He has a total of 3 siblings named Paxton, Payton, and Ashton. His educational and high school life has not been surfaced yet.

Talking about the Professional life of Bryton Myler, he created his Youtube channel while he was only 11 years old. On January 18, 2016, he uploaded his first video captioning “Bryton’s 1st free running at 11 years old”. The video consists of him having some gymnastic skills.

Likewise, his video with the title “Bryton’s free-running training demo,” and “Bry Open From 2915” got the attention of the Youtube channel named “Ninja Kids TV”. He signed the contract as a member of the channel. On November 14, 2016, he uploaded a video named ” Bryton Myler’s Acting Demo Reel”. Later, he appeared as ‘Bulk’ in the ‘Powe Ranger’ Series. Youtube became one of the breakthroughs in his life, which gained him lots of recognition and fame. He made a guest appearance on the reality TV show named “proper manors”. He appeared in the movie “The Last Straw”.

Myler is still keeping up his Youtube career. He uploads challenging videos, vlogs, varied content related to stunts like gymnast, karate, trampolining, and so on. He is seen creating collaboration videos with his friends and siblings too.

The net worth of Bryton Myler is calculated to be around 2.9 Million USD.

He earns around 649K USD from his Youtube channel. There are many sources of his income including acting too.

The actor’s salary and income are not disclosed yet.

Bryton Myler has maintained a clean profile and has not been part of any rumors and controversies up to date.

As Myler is quite young and growing, his accurate body measurements including height, weight, and shoe size are not known.

Bryton Myler has an amazing personality. His complexion is fair with brown colored hair and a couple of Black eyes.

Bryton Myler has a verified Instagram account as @bryton_myler with more than 53.2K followers while he has a Tiktok account having about 1.5K followers with 1.9K likes.

Myler’s Youtube channel has amassed around 2.07 million followers. On 28 Feb 2022, he uploaded a video titled ” Extreme Battle Royale” which has received about 1.3K views.