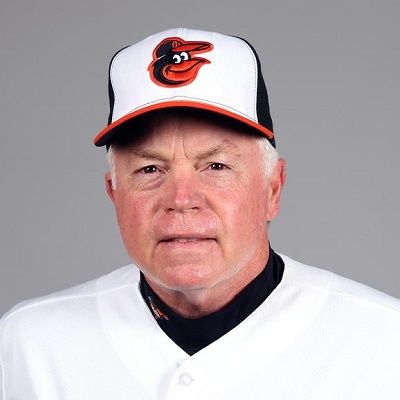 Buck Showalter is a married man. His wife’s name is Angela Showalter(born April 10, 1960). The couple exchanged wedding vows in 1983. The couple has now been married for more than 35 years. They have two children, their daughter, Allie Showalter, and son, Nathan Showalter.

Their daughter Allie was born in January 1987 and Nathan was born in 1992. Both of their children are married. Allie married Andrew Robinson on February 2, 2013, and had their first baby, a boy, in 2017. Their son, Nathan married Rebecca Gardner in 2017.

Angela is known for her charity endeavors. She contributed to KidsPeace, an organization that has been encouraging foster care.

Who is Buck Showalter?

Buck Showalter is an American former Major League Baseball manager. During his managerial career, he served as the manager of New York Yankees, Arizona Diamondbacks, Texas Rangers, and Baltimore Orioles.

Moreover, he is also a former Minor League Baseball player and an ESPN television analyst. Currently, Showalter works for the YES network for the Yankees telecasts. He was named the American League Manager of the Year three times.

His father worked 23 years as a teacher and principal at Century High School. Before taking the job of a teacher, his father was a Little All-American fullback at Milligan College and was considering a career in the NFL with the Pittsburgh Steelers. However, he chose to become a high school coach.

Showalter spent his childhood nearby Century. His ancestry is German.

Talking about his education, Showalter graduated from Century High School. It was the same school where his father worked as a teacher and was also the principal.

He played for seven seasons in the Minor League Baseball. During his playing career, he averaged .294 with 17 home runs and 336 RBIs. After retiring, he became the manager of Oneonta Yankees of the New York–Penn League.

After that, he was offered a place in the coaching staff of the New York Yankees in 1990 and eventually became their manager two years later. During his time with the Yankees, he had a record of 313–268. He left the Yankees as they asked him to fire his hitting coach, Rick Down.

In the mid 90’s he served as the manager of the Arizona Diamondbacks for three seasons. He had a record of 250–236 during his time with the Diamondbacks. He took a break and took the role of an analyst for ESPN for two years.

In 2012 he returned as the manager of the Texas Rangers. However, the Texas team fired him on October 4, 2006. He had a record of  319–329. He then joined the Cleveland Indians as their senior advisor to baseball operations.

In 2010 the Baltimore Orioles named him their new manager. He finished his Orioles career with a win percentage of .494. He served as their manager from 2010 to 2018. His contract was not extended after the Orioles finished with a franchise-worst 115 losses.

Buck Showalter has an estimated net worth of around $14 million. During his time with the Orioles, he had an annual salary of around $3.5 million.

He was involved in some controversies when he was the manager of Orioles. He was accused of putting too much trust in Robert Andina and Vladimir Guerrero. Also, he had made some ballpen moves and his management was questioned by the fans.

There were rumors saying the Astros interviewed him for the head coach role in January 2020.

He has a height of around 5 feet 7 inches and weighs around 88 kg. Moreover, he has salt and pepper colored hair and brown eyes.

You may also like to read the Age, Bio, Net Worth, Relationships, of Stephen Jackson, Dennis Farina, Kyle Thousand, and more.