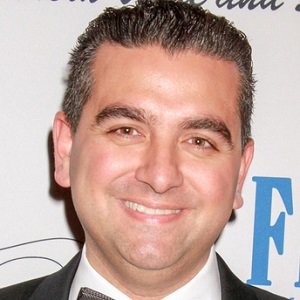 Cakes are special. Every birthday, every celebration ends with something sweet, a cake, and people remember. It's all about the memories

No matter what the recipe, any baker can do wonders in the kitchen with some good ingredients and an upbeat attitude!

What is the relationship of Buddy Valastro?

Reflecting on the personal life of Buddy Valastro, he is a married man. He is married to Lisa Valastro on 14 October 2001 and has been blessed with four children.

The couple is living a happy married life having no rumor of their separation of married life.

Who is Buddy Valastro?

He rose to stardom with his appearance on TLC series Cake Boss and the spin-off show Kitchen Boss.

He was born on 3 March 1977 and named Bartolo Valastro, Jr. He is of Italian ethnicity and has Italian-American nationality.

Valastro has learned Baking and started working in his family business at the age of 11.

His father passed away when he was just 17 years old. He is often called by his nickname Buddy and grew up with four sisters: Grace, Mary, Maddalena, and Lisa

After the death of his father, he started running his family business on his own. He is the owner and head baker of Carlo’s Bakery.

In 2007, he appeared on the television series Food Network Challenge as its guest mentor.

In 2009, he became the host of the cooking television show Cake Boss. As a matter of fact, the reality TV show cake boss has led to a massive increase in the size and profits of his business.

Likewise, he became the producer and the host of the cooking show Next Great Baker and Kitchen Boss.

After onwards, he became the host of several shows including Buddy’s Bakery Rescue, Batalha dos Cozinheiros, Buddy’s Family Vacation, and Bakers vs. Fakers.

Valastro is not only a host but also an executive producer of cooking shows like Batalha dos Cozinheiros, Cooks vs. Cons, and Bakers vs. Fakers.

In 2014, Buddy Valastro has even launched an Event Planning & Catering company, Buddy V’s Events. The company specializes in catering everything from corporate events to family gathers.

He also creates wedding and specialty cakes for shipment across the country. Additionally, he partnered with Whole Earth Sweetener Co. on a campaign to “Rethink Sweet” in 2016.

Valastro has opened up many bakeries in New Jersey, Philadelphia, Texas, and New York. In addition, he is also an author who has published two Cake boss books.

His success in his career path has paid him well financially well. His net worth is estimated to be $10 million as of 2022.

He was criticized for trying to use fame to evade arrest.

Buddy Valastro has a good height of 5 feet 7 inches with a bodyweight of 62kg. He has dark brown hair color and his eye color is also dark brown.

There is no information about his shoe size.

What really happened to Buddy Valastro?