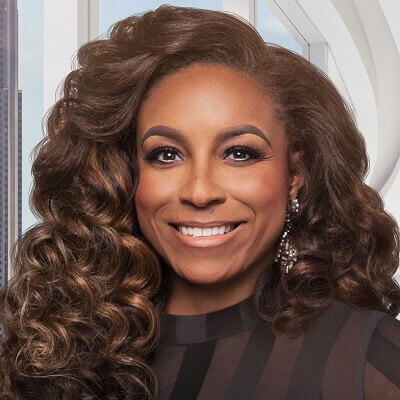 Buffie Purselle is a happily married woman. She is married to Dr. David Purselle who is an established psychiatrist based in Atlanta. Currently, he also serves as the Director of Georgia Psychiatric Consultants.

The couple together runs two medical practices. She helps her husband to manage Georgia Psychiatric Consultants.

Moreover, they spend time in San Juan, Puerto Rico, where they operate a telemedicine practice. They have been married for a long time now but have not revealed their marriage date.

They don’t have any children even though they have tried as they have suffered a run of 6 miscarriages over the years. They want to have children of their own soon as they have started the surrogacy process.

Buffie Purselle is an American reality TV star who came to the limelight as Dr. Simone Whitmore’s friend in the seventh season of the Bravo reality TV series, ‘Married to Medicine’. In addition to this, she is a tax and personal finance professional with over twenty years of experience.

Purselle spent her childhood days in Atlanta and her ethnicity is African-American.

Talking about her educational background, she graduated from Georgia State University in 2000 with a degree in business according to her LinkedIn page.

Buffie Purselle is a tax and personal finance professional with over two decades of expertise. She is a third-generation tax pro, according to her Bravo bio, and has also started two of her own businesses so far in her career.

Currently, she serves as the managing member of Buffie the Tax Heiress, a role she has been working on since 1999. In 2014 Buffie started Buffie, LLC  from where she helps business owners with her specialized “management solutions.”

Moreover, according to her Bravo bio, she also helps to run Georgia Psychiatric Consultants which is her husband’s medical practice located in Atlanta. The couple has a telemedicine practice in Puerto Rico as well, and they live there for six months a year.

In addition to all this, the couple also renovates their various homes and rental houses in their spare time, and she also works as a patron of various charities. At the moment, she volunteers for three different organizations according to her LinkedIn.

Since 2015, she has served as an image consultant at the Atlanta chapter of Dress For Success. A year later, she started volunteering at the Partnership Against Domestic Violence. Furthermore, in 2017, she became a board member for the Introducing Youth to American Infrastructure foundation.

However, she came to the spotlight from her appearance in ‘Married to Medicine’ which first aired on March 24, 2013. It follows the lives of seven women in the Atlanta medical community. She appeared in the latest season i.e. season 7 of the series which aired on September 8, 2019, as Dr. Simone’s friend.

Purselle has brown hair and similarly, a pair of brown eyes. She is 5ft. 7 inches tall and she has not revealed her weight and other body measurements. However, she seems to have decent height and weight with attractive body measurements.

As of 2020, Buffie Purselle has an estimated net worth of around $1 million – $5 million. Her sources of income include her several businesses and now a reality TV star. However, her annual income remains undisclosed and is hard to predict considering she has several sources of income.

Buffie has not been involved in controversy so far. She has been able to keep herself away from any type of controversy and scandal. So far, she has not done anything controversial in her career. She has kept her profile clean and has simply focused on her career and personal life.

You may also like to read more about the Bio, Career, Net Worth, and more about Joe Giudice, Vicki Gunvalson, Vanessa Simmons, and more.