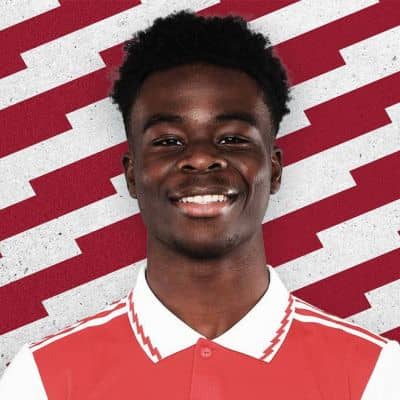 Is Bukayo Saka Single Or Dating?

Bukayo Saka is currently rumored to be dating, a 22-year-old Instagram influencer Tolami Benson. However, none of them have officially confirmed the news, so we can say it is just a rumor.

If any confirmed news regarding their relationship emerged, we will update the info as soon as possible.

Who is Bukayo Saka?

Bukayo Saka aka Bukayo Ayoyinka T. M. Saka is a professional English footballer. He is a midfielder who actively plays for the Premier League club Arsenal and the England national team.

He is widely known for his attack mentality with creativity and is also counted among one of the best young footballers in the world.

On November 21, 2022’s world cup held in Qatar, Bukayo joins Enner Valencia, in the Golden Boot race by scoring two goals against Iran. In the end, England defeated Iran by 6-2, in the FIFA World Cup 2022.

Similalry, he is of mixed ethnicity and according to the astrologers, his birth sign is Virgo.

Moving on to his family background, he was born to his father, Yomi Saka, and mother, Adenike Saka. In the 1990s, his parents emigrated from Nigeria to London.

As per the sources, it is known his father is UK based businessman while his mother is a Chartered Accountant. She earned her diploma degree in accounting from the University of West London.

Adding more, he has a younger brother named, Abayomi Saka. He also played at Premier League Side, Watford for a short time. Apart from this, there is no any info regarding her personal or professional life.

As per his academics, he attended Edward Betham Church of England Primary School from 2013 to 2016. Later, he graduated from Greenford High School with exceptional grades in his GCSEs.

After playing for the youth teams of Watford for a certain time, he joined Arsenal’s Hale End academy at the age of seven.

Later, he signed a professional contract with Arsenal and was named to the under-23 side, after turning 17 years old. For Arsenal, he made his first-team debut by applying in UEFA Europa League Match against Vorskla Poltava.

He then started to play under the current coach- Mikel Arteta. He is also often regarded as the youngest player to play in the first since Cesc Fabregas.

Following that, he signed a renewed long-term contract with Arsenal on 1 July 2020 with an undisclosed fee.

Making the first foal of the new campaign in EFL Cup second round, to West Bromwich Albion, he took his team towards the second win. While playing against Tottenham Hotspur, he made his first Premier League goal for the season in September 2021.

He had his senior England debut, after scoring a 3-0 victory against Wales on 8 October 2020, in an international friendly game. In the 76th minute, he was substituted by a few Arsenal players, including Ainsley Maitland-Niles.

Subsequently, he was listed for the 2021–22 season, as England player of the year, over Declan Rice and Harry Kane. Then, he was named for the 2022 FIFA World Cup on 10 November.

Arsenal football star Bukayo Saka is believed to be having a net worth of $3 million (as of 2022). His major sources of income include his football career and brand endorsements.

At the age of 21 years, he is paid a salary of $1.9 million. Looking at his active career it can be assumed that his wages will certainly skyrocket.

Will Bukayo Saka Be Able To Take Golden Boot In FIFA World Cup 2022?

After the victory of Ecuador with Enner Valencia’s twice goal over the host Qatar in the FIFA World Cup 2022 on November 20, 2022, Bukayo joined the race for the Golden Boot along with him.

In the opening game on 21 November 2022, he made 2 braces after England trounced Iran in their opening game. He became the youngest goalscorer for England at the FIFA World Cup 2022.

The young footballer stands at the height of 5 feet 10 inches and weighs around 72 kg. In addition, he has a pair of dark brown eyes along with black hair.

Arsenal midfielder, Bukayo is quite active on social media platforms. On Instagram @bukayosaka87, he is followed by more than 2.8 million people.

There is also a Fan-based Facebook under his name, which has garnered around 2.5 million followers.