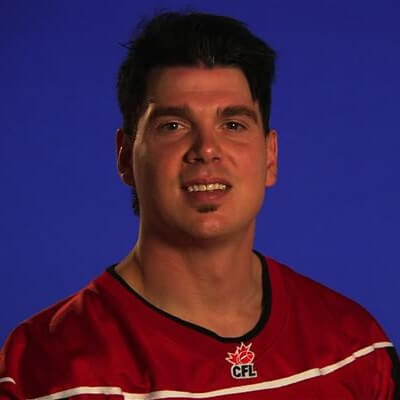 Burke Dales currently seems to be single. He is very private about his personal life and hasn’t shared details on his partners or relationships until now. As of now, there is no information about his previous relationships.

However, he stated in an early interview in 2007 that he was offered the chance to be cast in the 1st season of The Bachelor, but he turned the offer down. He said that the showrunners found him suitable for the role as his build and frame was perfect and the fact that he played a professional sport was just icing on the cake.

Who is Burke Dales?

Burke Dales is a former professional football punter from Canada. He had a long 9-year career with many successes in different football teams.

Due to this, he is popular even now, many years after his retirement, and fans all over Canada recognize him as one of the best punters in football.

Burke Dales was born on the 16th of February, 1977 in Collingwood, Ontario, Canada. As of July 2020, his age is 43. He was born to Heather Dales (mother) and Jim Dales (father). He is one of their two children and has a sister named Stacey, who is a former Women’s National Basketball Association (WNBA) player.

Dales has not revealed where he went to high school. After completing his high school studies, he attended Concordia University where he played football.

Dales played football throughout his time at Concordia University and after that attended the 2002 Pittsburg Steelers training camp. He was signed by them in 2002 as an undrafted free agent.

His unique style of kicking which hadn’t been seen since the 80’s also separated him from the pack and helped in his signing.

Later in 2003, he attended the Montreal Alouettes’s training camp and sat out the 2003 and 2004 season. In 2005 he was signed as a free agent by the Calgary Stampeders.

He stayed with the Stampeders till 2012, when he signed for another CFL team, the Edmonton Eskimos. He also tried but failed to get interest from any NFL teams in his career.

Burke Dales played for the Montreal Alouettes for his last season in 2013 before retiring from the sport in 2014. He is recognized as a great punter in the CFL by many fans from his own or even opposing teams.

Burke stands at a height of 6 feet 3 inches and weighs around 102 kg. He has black hair and a pair of dark brown eyes.

Burke Dales has an estimated net worth of around $500k to $1 million as of 2020. He earned a considerable amount of money from his long career in the CFL. We also have no information on his annual salary when he was still playing or currently, though we know that an average player in the CFL makes around 80k-85k dollars annually.

Dales has not been involved in any controversies. He has been able to keep himself away from any type of controversy and scandal. So far, he has not done anything controversial in his career. He has kept his profile clean and has simply focused on his career and personal life. Similarly, there are no rumors about him.

Burke Dales is not active on social media sites. He is very private and has decided to stay away from the social media world. There are fan pages dedicated towards him but he does not run any of it.

You may also like to read the Bio, Career, Net Worth, Body Measurements, Relationships, Social Media, and more about Devin Lucien, Sydney Leroux, Matt Barnes, and more.