Famous for his roles as Owen Harper in the BBC series Torchwood (2006–2008). He is currenlty single.

Burn Gorman is single and has divorced his first wife.

Burn Gorman married school teacher Sarah Beard on 17 July 2004. They have three children, two girls, and a boy. Their first child, Max, was born in Cardiff in 2006, where Gorman was filming the first series of Torchwood. They separated and divorced in 2017. 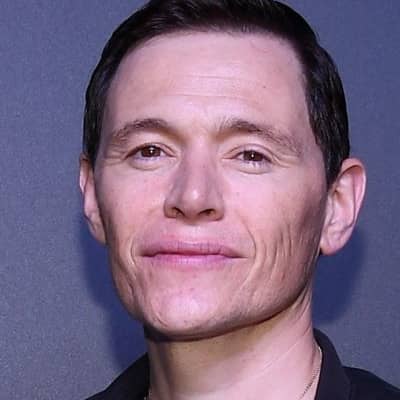 Who is Burn Gorman?

Burn Gorman is an English actor and musician. Burn Gorman is famous for his roles as Owen Harper in the BBC series Torchwood (2006–2008).

The talent that he was gifted from birth helped him achieve great places in the hearts of the audience. Recently, he is receiving limelight for telecasting in The American Thriller film Watcher along with the cast, Maika Monroe and Karl Glusman.

Burn Gorman is loved for his presence as Phillip Stryver in The Dark Knight Rises (2012), Karl Tanner in the HBO series Game of Thrones (2013–2014). Not only that but also people appreciate him for featuring Hermann Gottlieb in Pacific Rim (2013), its sequel Pacific Rim: Uprising (2018), and Major Edmund Hewlett in the AMC series Turn Washington’s Spies (2014).

Besides that, Gorman portrayed ‘The Marshal’ in the first season of the Amazon drama The Man in the High Castle.

Burn Hugh Winchester Gorman was born on 1 September 1974 under the zodiac sign of Virgo, in Hollywood, California USA. He is a 46-year-old British-American actor who holds British nationality and belongs to the  Caucasian ethnicity.

Moving on to his parents, his father was a professor of linguistics at UCLA. There is no information about the name and professional details of his mother. He is the only brother of three older sisters. At the age of seven, the whole family moved back to England and settled in London thereafter.

In the context of his educational background, his early years are unknown, but later Burn went to Manchester’s Metropolitan University’s School of Theatre and completed his Bachelor’s degree in Acting in 1997.

Burn Gorman has dark brown hair and dark brown eyes. He stands tall at a height of 5ft 9inches (1.75m), while his weight is around 160lbs (72kgs). Except for this, other information about his body statistics, biceps size, and shoe size aren’t available.

Burn Gorman debuted in acting with the role of Ben Andrews in the long-running ITV soap opera “Coronation Street” in 1998. Afterward, he was seen for guest-present as Geoff Simpson in the episode “Not Waving But Drowning” of the BBC One medical drama series “Casualty” (2000). Also, he had a similar appearance as Sean Finnigan in the episode “Coming Of Age” of the BBC  police procedural drama series “Merseybeat” (2001).

He then signed as Al Weisberger in the 2001 musical film “Love Is Not Enough”, written and directed by Mark Norfolk, and started his film journey. In the year 2002, he acted as DC Fairchild in the 2002 ITV crime drama film “A Good Thief”. To add up, he portrayed Gazza in the 2004 crime film “Layer Cake”, alongside Daniel Craig and Tom Hardy.

Burn Gorman featured as Jed on the TV soap opera EastEnders in March 2007. Coming to his recent work in 2022, he signed as The Carabiniere in the film Pinocchio which is in the process of filming. Next, he is about to appear in Pacific Rim 3 as Hermann Gottlieb.

Not only that, he acted as a voice-over artist in video games like Risen in 2009 and Star Wars: The Old Republic in the year 2011.

Moreover, Gorman was nominated for Best Supporting Actor in a Musical in the 2010 Whatsonstage Theatre Awards for the role of  Bill Sikes in the West End revival of the musical Oliver!

As of early 2022, Burn Gorman’s net worth is estimated to be around $3 million. He earned and accompasses a great height through his successful career as a professional actor. He altogether featured in more than 60 television and film, where his great perseverance and astonishing acting skills are noteworthy.

As a celebrity in the spotlight, he is successful in keeping himself out of rumors, scandals, and controversies that impact his professional and personal life.