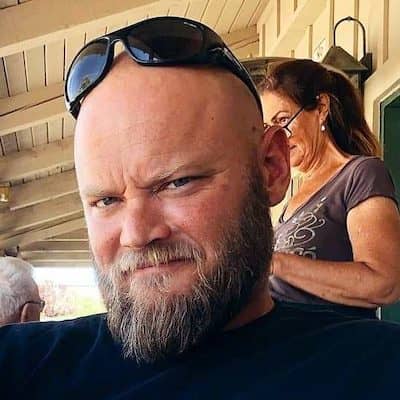 Burt Jenner is currently in a relationship. He is dating a girl named Valerie Patalo. But the details about their affair are unknown.

This lovely couple together has two children. Their son William Behr Jenner was born in 2019 while they welcomed their other son Bodhi in 2016.

Who is Burt Jenner?

Burt Jenner an American businessman and race driver. He is fond of dogs and is the owner of West LA Dogs.

His birthdate is 06 Sep 1978 and he was born in Los Angeles, California, the United States as Burton William Jenner.

The name of his mother is Chrystie Scott and his father is Caitlyn Jenner. They married in 1972 but separated in 1981.

His dad was born William Bruce Jenner but later in 2017, she completed her sex reassignment surgery. However, she confronted that she is a transwoman.

Burt’s ancestry is Caucasian and has a sister named Cassandra Marino. From his father’s marriage to Kris, he has half-siblings named Brandon Jenner, Brody Jenner, Kendall Jenner, and Kylie Jenner.

As per his academics, he attended Malibu High School and Santa Monica College.

Burt Jenner used to train bulldogs within his house. But after winning an amount of $100,000 in Octane Academy, he started his dog boarding business.

He used that money for the downpayment and founded West LA Dogs. This facility is spread in 14,000 square feet and also provides organic dog food.

He is also an amazing racer and competed in several matches. His racing timeline is,

He collected a net worth of around $2 million US as of 2021. His salary and other incomes from his career are unknown.

This businessman is keeping himself away from rumors and desperate scandals. But at some point, he accused Kris Jenner of changing his relationship with his dad Caitly.

As of now, he often talks with him and also apologized to Kriss for the accusation.

Burt Jenner’s height is 6 ft 1 inch and his body weight is 88 kg. Similarly, his eyes are blue and his hair color is light brown. But he likes to shave his head.

Kylie Jenner does not plan to keep her second pregnancy secret the entire time! Is she pregnant?