Buzz started dating Joan Archer in 1952. After being known for a while they took vows on 29 December 1954.

They also welcome 3 children to this world. One is daughter Janice Aldrin and 2 are sons whose names are Andrew Aldrin and James Aldrin.

Then he dated Gina Lollobrigida in 1969 for a while and parted their ways.

Then after some time in the year, 1986he started to be in a relationship with Lois Driggs Cannon. Knowing each other for a while they married in 1988 in the month of February. 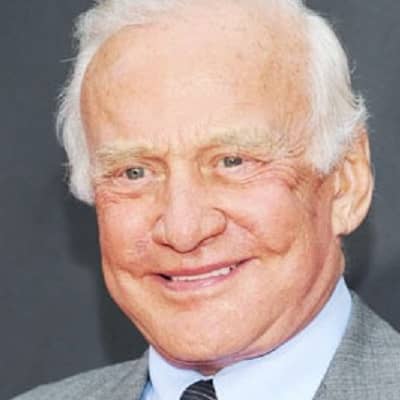 Who is Buzz Aldrin?

Buzz Aldrin is a well-known former astronaut, engineer, and fighter pilot from the United States.

He is best known as the lunar module pilot of the Apollo 11 mission and the second person to set foot on the moon.

He also served as a jet fighter pilot during the Korean War, shooting down two MiG-15 fighter planes. Aldrin was also awarded the Presidential Medal of Freedom in 1969.

Return to Earth and Magnificent Desolation are his autobiographies.

Aldrin has American citizenship, is of white ethnicity, and follows the Christian faith.

Buzz was born to Edwin Eugene Aldrin Sr, a longtime executive at Standard Oil Co. and an aviator in the United States Army during World War I and World War II.

He died on December 28, 1974, and his mother, Marion Aldrin, died in 1968. He also has two older sisters, Fay-Ann Aldrin and Madeleine Aldrin.

He went to study at Montclair High School in New Jersey.

In 1951 he has graduated from the United States Military Academy in West Point, New York with a degree-holding in Mechanical engineering.

Later he earned a Doctor of Science degree in 1963 in Astronautics from the Massachusetts Institute of Technology.

Buzz began his career in the Air Force Space Division before being selected as an astronaut by NASA in 1963. He became the pilot of Gemini 12 and demonstrated to the world that astronauts could function outside the spacecraft while in orbit.

On July 20, 1969, he was chosen as the pilot for the Apollo 11 mission, in which he and Neil Armstrong created history by walking on the moon for the first time. After leaving NASA in 1971, he became the Commandant of the US Air Force Test Pilot School. After more than two decades of service, he was retired in 1972.

Following his retirement, he spoke about the need for space exploration and proposed a spaceship design, the Aldrin Cycler, which was supposed to use less fuel.

Aldrin then began dabbling in the media sector by collaborating with Snoop Dogg on a Rocket Experience rap single. He then went on to star in the film Transformers: Dark of the Moon, where he established himself. Edwin also played a Simpson character in Deep Space Homer and Futurama. He also had an appearance in a couple of episodes of The Big Bang Theory.

Buzz is both an astronaut and an author, with his memoirs Return to Earth and Magnificent Desolation being published in 1973 and 2009, respectively.

He has appeared in films such as The Boy in the Plastic Bubble, Punky Brewster, After Dark, In The Shadow of the Moon, Fly Me to the Moon, 30 Rock, Dancing with the Stars, Hell’s Kitchen, Miles from Tomorrowland, and many others.

He is one of the richest men to earn around net worth of $14 million. He is one of the legendary astronauts to live on this planet as he has associated with Apollo 11 and Gemini 12 missions to space which help to build his career successfully. However, there is no information regarding the salary he earns, and his primary source comes from his career.

There have been no rumors or disputes surrounding Aldrin. He has been enjoying a very comfortable life, and he is now 92 years old, and he has contributed his entire life in all fields of his job.

He is a handsome man who stands at the height of 5 feet 10 inches tall. He weighs 71kg and has a fair skin tone with blue eyes and gray hair. There is no available information about Buzz measurements like hips, waist, and chest sizes.

Buzz is one of the celebrities who have millions of followers and fans on networking sites. He is active on Twitter with 1.5M followers and almost 4140 tweets, and on Facebook, he has got 850k fans. However, he has not been active on a networking site called Instagram. Likewise, he has a YouTube channel with 566 subscribers.