Luxury Italian brand Bvlgari to showcase the most magnificent jewelry pieces and gems at Moscow Kremlin starting this Friday! 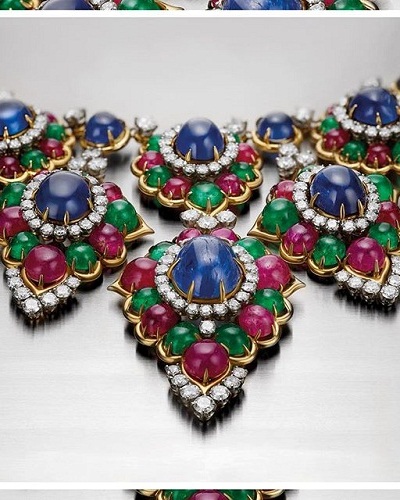 If you are a lover of gems and antique jewelry, you will like this! Starting from this Friday 7 September 2018, there will be an exhibition of the world’s finest and most luxurious pieces of jewelry worn and owned by the most famous celebrities of the world at Kremlin in Moscow, Russia. It is the collection of the Italian luxury jewelry brand BVLGARI. This brand also has the most magnificent timepieces, accessories, and high-end perfumes.

About the exhibition at the Kremlin

The exhibition kicks off this Friday and it will have on display around 511 most exquisite creations of all time. This will be showcased at the Moscow Kremlin Museums and the exhibit has been given the name of ‘Tribute to Femininity’.

The gems and jewelry pieces have been collected over a span of 130 years and belong to BVLGARI luxury brand which is now part of France’s LVMH group. There are pieces from the 1970s which were first designed and made by the founder of the company Sotirios Voulgaris. There will also be jewelry items which have incorporated gems and also ancient Greek and Roman coins. The collection also includes 100 priceless items which are from private collectors.

There are on display items which were once worn by famous actresses of yesteryears such as Sofia Loren (1934-present) and English actress and model Naomi Campbell (1970-present). There are emerald, diamond, and pearl pieces which are timeless and priceless. Bvlgari had purchased these expensive pieces from the actresses and they all are authentic. There is also a glittering collection of Elizabeth Taylor’s (1932-2011) pieces of jewelry and also the jewelry which has been recently purchased from the family of the Italian actress Anna Magnani (1908-1973). Anna was the muse of the directors Pier Paolo Pasolini and Roberto Rossellini.

It is said that the exhibit is the richest of all time for the company BVLGARI. This has been disclosed by the head/CEO of the company, Jean-Christophe Babin who also stated that the Kremlin Museums house one of the biggest collections of jewels in the world.  Jean-Christophe said:

“Russians have a great culture of art, architecture, and jewelry,”

It was founded by Sotirios Voulgaris and this Italian brand has a huge collection of jewelry, watches, perfumes, leather goods, cosmetics, and accessories. LVMH now had a 50.4% stake in the company which has more than 3.8k employees. The current Chairman of the company is Paolo Bulgari.

The Bulgaris were from Epirus area of Greece and were a silversmithing family. Sotirios migrated to Rome and in 1884 launched his first store. It has a deep influence of Byzantine culture on it similar to that on the Russian jewel making. It expanded globally in the 1970s. It also owns Bvglari Hotels and Resorts. There are also around 300 boutiques of the company around the world.

It is a state-run museum located in the fortified complex called Moscow Kremlin. This place has seen great changes over the years and its roots are in the Kremlin Armoury museum founded in 1806 and the present form of the Museum began in 1991. It gets around 2.8 million visitors per year. It is a ticketed place and Moscow Kremlin area also houses the home of the President of the Russia Federation.