Byron Scott is a head coach and a former NBA player. Byron is married to his wife CeCe Gutierrez. Their wedding was live-streamed. 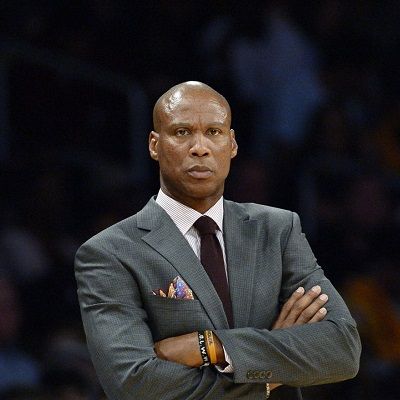 With all the adversity we've faced, I told them before the game that you guys have always done a good job of coming together in the face of adversity. That is something we're going to have to do, not just tonight, but the rest of the season

It's not an achievement, it's what we expected. We've gotten to .500

now the key is to keep going. There are a lot of young guys that didn't experience the terrible season we had last year

The intensity level is getting tougher because teams are fighting for the playoffs. And we haven't gotten that message yet

Like I told the guys, that's a good basketball team. We hung in there, we kept fighting, but that is no consolation. We still have to learn how to get over the hump

That's just a very good basketball team. They come with their hard hats on every night. They're not going to make a lot of mistakes.

Byron Scott is married to CeCe Gutierrez aka Cecilia Scott. His wife CeCe is an Entrepreneur and co-author. The couple married on 11 June 2020.

Their wedding was intimate and witnessed by their close friends’ live and family due to the pandemic. Scott’s to-be-wife wore Netta BenShabu on her big day whilst he completed the look wearing a black suit and matching bowtie.

The bride’s mother Edith Gutierrez sang the bridal song, Ave Maria followed by her brother Jay who sang Rise Up.

Previously, he was married to Anita in 1985. The couple has three children together, Thomas, LonDen, and DaRon. After 29 years, the couple separated in June 2013, and in March 2014, they officially divorced.

Who is Byron Scott?

Byron was born on March 28, 1961, which makes him 58 years old as of now. His father’s name is Allen Holmes and his mother’s name is Dorothy Scott. He does not have any siblings. He is of African-American ethnicity and is of American nationality.

Scott played basketball at Morningside High School. It was the shadow of The Forum, which used to be the home to L.A. Lakers. After that, he joined Arizona State University where he played college basketball for three years. Then, he left after his junior year in order to play in the NBA.

Scott was selected by the San Diego Clippers with the fourth pick of the NBA Draft of 1983. In the same year, he was traded to the L.A. Lakers for Norm Nixon. Scott played for the Lakers, Indiana Pacers, and Vancouver Grizzlies.

However, it was his time in Lakers that defined him as a player. He was one of the key stars for the Lakers during their Showtime era.

He was a regular starter in the legendary Lakers team lining up alongside Magic Johnson, James Worthy, Kareen Abdul, and A.C. Green. He played for the Los Angeles side for 10 consecutive seasons. During that time, he won the NBA Championship three times.

In 1984, Scott averaged 10.6 PPG in 22 MPG which earned him a spot in that year’s all-rookie team. 1987-88 was his best season in his playing career. He led the champions Lakers averaging 31.7 ppg. He played as the Lakers shooting guard from 1984 to 1993. After playing for Indiana Pacers and Vancouver Grizzlies from 1993 to 1996, he again returned to Lakers for his last NBA season.

His coaching career began in 1998. He began his first two seasons as an assistant with the Kings. He helped the team to an excellent three-point shooting percentage in his time with the Kings.

In 2000, he took the job of a struggling New Jersey Nets. His first season there was not an ideal one. But, the team improved significantly in the second season. They won their first Atlantic Division crown and appeared in their first NBA Finals against L.A. Lakers but they lost the series.

The following season, they were once again beaten by the Spurs in the conference finals. Scott was dismissed from the job and he briefly served as a studio analyst for the NBA.

On July 2, 2010, Scott became the coach of the Cleveland Cavaliers. That season, Cleveland endured a 26-game losing streak which was then the longest such streak in the history of the NBA.

In April 2013, Cleveland fired Scott. This firing was very surprising for analysts and the Cleveland players.

On July 28, 2014, he signed a contract to coach the side he earned his name with, the L.A. Lakers. The team was rebuilding and in his first season, they finished with a 21-60 record.

However, in the second season, too, the Lakers finished in a franchise-worst 17-65 in 2015-16. The Lakers didn’t award him another contract and he is yet to manage another team.

Bryan won more awards as a player than he did as a manager. As a player, Bryan won the NBA three times in 1985,87 and 1988. Similarly, he was awarded the FIBA Eurostar Award in 1997. He also became a Greek Basket League winner in 1998.

As a coach, his biggest individual achievement was the NBA Coach of the Year award in 2008. Furthermore, he won the NBA All-Star Game head coach in 2002 and 2008.

Jason Kidd was one of the players who were responsible for the controversial sacking of Scott from the Nets. In 2015, Scott called Kidd an a**hole in an interview. This became very controversial and reignited the feud.

Byron Scott has a height of 6 feet 3 inches. He weighs around 88 kg. Like you would expect from a former basketball player, Scott still looks to be in good shape.