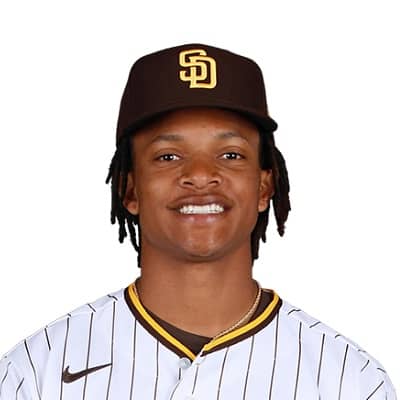 What is the relationship of C. J. Abrams?

C. J. Abrams is possibly single and is not dating anyone.

He seems to be a very private person regarding his love life relationships and keeps his life away from media attention.

C. J. Abrams is a professional baseball player. He is best known for paying shortstop for the San Diego Padres. Also, he was selected to participate in the All-Star Futures Game in June 2021.

Abrams was born on October 3, 2000, in Alpharetta, GA. As of 2022, he is 21 years old. Talking about his nationality, he identifies as an American. He was born under the zodiac sign of Libra.

His birth name is Paul Christopher Abrams. He was born to parents Chris Abrams and Ruth Abrams. Whereas, the other information about his siblings is not available.

Regarding his education, he enrolled at Blessed Trinity Catholic High School in Roswell, Georgia.

Abrams was recognized as one of the top prospects for the 2019 MLB draft. He was selected in the first round by the San Diego Padres with the sixth overall pick. Later, on June 8, he signed with the Padres for $5.2 million.

He was promoted to the Fort Wayne TinCaps in August. He couldn’t play a game in 2020 due to the cancellation of the minor league season because of the COVID-19 pandemic.

C. J. will begin the 2021 season with the Double-A San Antonio Mission. Also, he was selected to play in the All-Star Futures Game in June 2021.

Abrams was diagnosed with a fractured left tibia and sprained medial collateral ligament on July 4, ending his 2021 season. The padres selected Abrams’s contract on April 7, 2022, and was added to their Opening Day roster, where he made his big league debut.

Abrams along with McKenzie Gore, Luke Voit, Robert Hassell, James Wood, and Jarlin Susana on August 2, 2022, was traded to the Washington Nationals in exchange for Juan Soto and Josh Bell.

C.J. has accumulated a wealthy sum of money from his career as a baseball player. As per the sources, his net worth ranges between $1 million- $5 million.

Whereas, his salary, income, and earnings are still under review.

Throughout his long professional career, Abrams has not been a part of any controversial news as of now. He has maintained a healthy distance between his professional and personal life.

He has black curly hair and a pair of black eyes.

Whereas, he is not seen much active on other social networking sites.