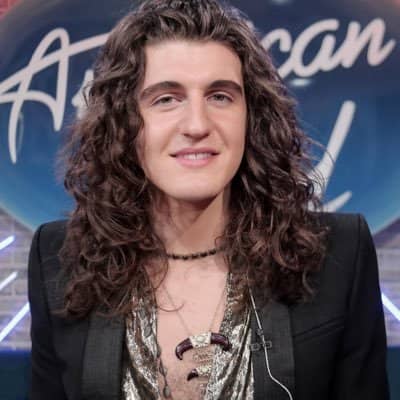 Guitar-wise, Jimmy Page, and then, you know, vocally, Robert Plan. I hope I can hit somewhere in the middle of those two, usually, when I perform.

Other contestants on the show, when they found out I am studying biblical theology, they started coming up to me and sitting with me during breakfast and asking me different questions about it.

Cade Foehner is a married man. He exchanged his vows with a singer Gabby Barrett on 5 October 2019 in front of 100 guests at Union Springs in Garrison, Texas.

This couple met each other in 2018 American Idol, and then started dating. They announced that they are expecting their first child, a daughter.

Who is Cade Foehner?

Cade Foehner is an American musician, singer, and songwriter. He is best known as the Top 5 contestant of American Idol (16th Season).

This singer was born on 24 July 1996, in Texas, the United States. His mother‘s name is Kelly Foehner. He hasn’t shared information about his father.

He has two sisters named Krystina Lout and Blaine Goodwyn. Cade is studying Biblical Theology at Liberty University. He belongs to English descent.

Cade Foehner grew up in Shelbyville, Texas. Earlier, he began playing music in church. He played the first time in a praise and worship band. Foehner wanted to be a pastor who rocks out for Jesus.

Cade’s favorite band is Led Zeppelin. This singer was in a band called Johnson’s Lost Crowes in 2013. Before taking part in American Idol, he auditioned for season 11 of The Voice. In 2018, he took auditioned in the sixteenth season of American Idol.

He was one of the favorites and popular contestants of The Idol. Katy Perry’s had a huge crush on him at the time of audition. Foehner was not able to make it to the final but he reached the top 5.

He performed Undo It during the American Idol top 5 but was eliminated. He covered many popular songs like Thrill is Gone, Have You Really Loved a Woman, Make it Rain, and Black Magic Woman. Cade uploads his cover songs on his YouTube channel.

He uploaded his official music video ‘Baby, Let’s Do This’, which has garnered over 52K views on his channel. Afterward, he released his song Southern Hallelujah on 30 March 2019, which went viral over social media.

Earlier, in 2018, Cade released his popular song Breathe Out, which has over 123 K views on his YouTube. Recently, he is working on his debut album CD.

Cade Foehner: Salary and Net Worth

Cade receives an average amount of $175-$3K from his YouTube. The salary of this singer is under review. Meanwhile, according to some sources, he has an estimated net worth of $1 million.

There is no rumor and scandal about this musician. Meanwhile, this singer has managed to keep himself out of any controversy and rumor. He is doing well in his career.