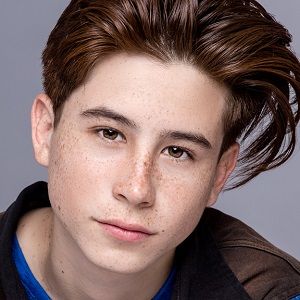 The 16-year-old American YouTuber, Caden is in a relationship with Madison Lewis. Recently in 2018, the couple began dating and are still together. Furthermore, he has also made a video named “I got her a ring!!!!!” on his YouTube channel.

Moreover, the lovebirds have been sharing various photos of them on their Instagram account. Apart from her, he has never been spotted with any other girl and never involved in any affairs. Currently, Caden and Madison are enjoying their love life and living elegantly.

Who is Caden Conrique?

Caden Conrique is an actor as well as a YouTuber from America. As an actor, he has some roles in Chicken Girls, Afterschool, and House of Darkness. Furthermore, he is also a YouTube earning over 52k subscribers as well as more than 295k followers on Instagram.

Caden was born on June 11, 2001, in Gilroy, California, United States of America. Talking about his nationality, he is American and his ethnicity is Hispanic. He developed his interest in acting from a very early age. Concerning his education, currently, he is pursuing his high school study.

Caden began his acting career from a 2016 movie named Weird Wild Wonderful Days of School followed by House of Darkness. Recently, he has also acted in a couple of films and TV shows such as Chicken Girls and Afterschool.  Furthermore, he is also a YouTube earning over 52k subscribers. Some of his most viewed videos on YouTube are I got her a ring, Happy birthday Mads, Almost kicked out of sams club, and Annie LeBlanc 13 birthday party.

Additionally, he is also an Instagram star with more than 295k followers. So far, he has collaborated with Hayden Summerall, Carson Lueders, Annie LeBlanc, and few others. Moreover, Caden has also starred in a couple of videos with Johnny Orlando, Mackenzie Ziegler, and Danielle Cohn.

Being an actor and YouTuber, he earns a decent amount of money from his profession. However, his salary and net worth are unknown.

So far, Caden has not won any awards in his career. Although, he has been doing his job in the best possible way and his works have been loved by many people around the world.

Caden has a height of 5 ft 5 inches and his weight is unknown. Moreover, he has a pair of light brown eyes and dark brown hair. Besides this, there is not any information regarding his other body measurements.