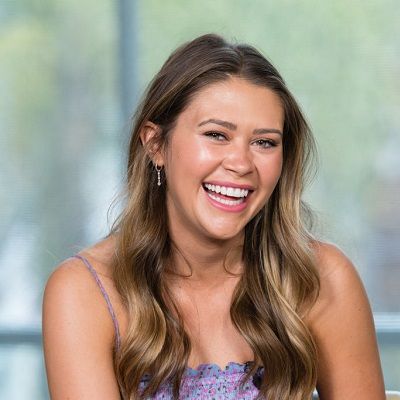 Caelynn Miller-Keyes is currently single. When she was in Bachelor in Paradise, she was close to Dean Unglert.

However, he dumped her and she was left heartbroken. Dean later asked her to leave the show and they have been traveling together since then.

Who is Caelynn Miller-Keyes?

Caelynn Miller-Keyes is an American television personality, model, and beauty pageant titleholder. Caelynn is well-known for appearing as a contestant on season 23 of The Bachelor.

She has been crowned Miss Virginia Teen USA 2013 and Miss North Carolina USA 2018. As of 2019, she is the contestant of Bachelor in Paradise.

Caelynn Marie Miller-Keyes was born on 15th June 1995 in Fredericksburg, Virginia, US. She is 26 years old. Her ethnicity is caucasian.

She is the daughter of Jerry Keyes (father) and Jai-Leah Miller (mother).

Caelynn was raised by her mother and stepfather John Kamenicky. Similarly, her mother and maternal grandmother are Native Americans enrolled with the Little Traverse Bay Bands of Odawa Indians.

Likewise, her paternal grandmother was the first woman to become head of the Federal Bureau of Investigation in Los Angeles.

When she was a child, she was diagnosed with encephalitis and was told by the doctors that she only had a 10% chance of ever walking again.

She attended the Stafford Senior High School in Fredericksburg, Virginia, and Virginia Commonwealth University in Richmond, Virginia. She majored in broadcast journalism.

Caelynn Miller-Keyes began her pageantry career at the age of 16 and competed in Miss Virginia Teen USA 2-13. Likewise, she represented Virginia at Miss Teen USA 2013 at Atlantis Paradise Island in Nassau, Bahamas.

After that, she represented North Carolina at the Miss USA 2018 competition held in Shreveport, Lousiana, and became the first runner-up.

In the year 2018, Miller-Keyes was cast in season 23 of The Bachelor. It was filmed throughout fall 2018 and she was later revealed by the American Broadcasting Company as a contestant.

In August 2019, Caelynn appeared on season six of Bachelor in paradise which aired on 9th September 2019.

The estimated net worth of Caelynn is $500 thousand US. As an American TV personality, she receives an average salary of $44,600 US.

Similarly, as the winner of 2018 Miss North Carolina USA, she won $18,000 per year for up to four years of full-time matriculated undergraduate scholarship. Being a contestant of The Bachelor, she makes around $100,000 US.

Caelynn is the victim and survivor of physical assault so she adopted sexual assault awareness as her primary platform of advocacy during the Miss USA competition.

During her sophomore year of college, some of her friends were drugged and misbehaved.

Caelynn Miller-Keyes has brown hair and green eyes. She is around 5 feet 6 inches tall and has 55 kg of weight.

Caelynn Miller-Keyes reunites with boyfriend Dean Unglert during his hospital discharge after his skiing accident in Switzerland!

The show Bachelor in Paradise season 6 will feature the first same-sex relationship couple with Demi Burnett!